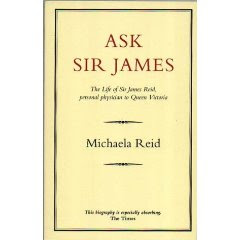 A first glance at the cover of "Ask Sir James - The Life of Sir James Reid, Personal Physician to Queen Victoria" might cause one to think it would be a very dull medical tome but it is an utterly absorbing book, filled with so many fascinating details, which are not recorded elsewhere. Written by Sir James' daughter, Michaela Reid, the book follows the doctor through the reigns of Queen Victoria, Edward VII and George V, and has a foreword by Elizabeth Longford.

Among countless other anecdotes, it includes the riding accident of the Queen's youngest granddaughter, Ena of Battenberg - the future Queen of Spain - and the story of the dreadful shooting accident in which the Queen's son-in-law, Prince Christian, lost an eye. Although that might appear macabre, Reid's description of Queen Victoria's response to the necessity of surgery to remove the eye is almost amusing:

"Her Majesty said that it was quite unnecessary as formerly she knew several people with shot eyes who did not have it done and who did not become blind; that nowadays doctors were always for taking out eyes; and in short she spoke as if Lawson and I wished to do it for our own brutal pleasure...."

Another tiny detail concerns Grand Duchess Elizabeth sending for Reid, while she was in London for her grandmother's jubilee, in order to treat a small spot on her face - which he did with nitric acid!

All in all, it is a really wonderful book to return to again and again!
Posted by Christina at 22:45