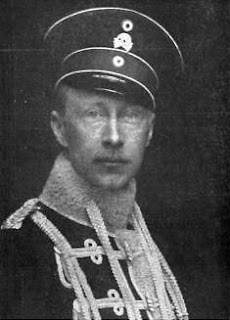 Apologies again for my tardiness in updating this blog! Interesting how matter arise in our lives that lead us into a kind of temporary seclusion, which leaves a lot of time for sitting about in unwholesome atmospheres but brings thing to light. Family 'illness' necessitates time spent in such hospital atmospheres. Can anything be less conducive to health than being in that kind of atmosphere of a conglomeration of belief in illness? The more I see of illness, the more apparent it is that everything originates in our thoughts...but that's another story....)

For some bizarre reason, last night I dreamed of Crown Prince Wilhelm of Prussia, eldest son of the Kaiser, and wished so much this morning that I could remember that dream! The Crown Prince's memoirs were written in exile so short a time after World War I, during which he must have lived through horrendous experiences, including the daily reports of the loss of his friends and the gradual collapse of all he had been brought up to expect he would one day inherit. Like most adolescents, he seemed to go through a stage of rebelling against his father while his love for his mother casts a whole new light on a woman whom I considered rather shallow. He also is impressive in his balanced view of events - I stand in admiration of his considered appraisal of all that had happened, which sounds so balanced and thoughtful, even down to his fair descriptions of his father.

As I am presently working in a book in which he plays quite a minor role, it feels like opening a door to a whole new world of understanding. Rather than seeing Queen Victoria's family solely from the perspective of her children and grandchildren, it's interesting to see how they appeared as parents. In truth, nothing is ever as it seems, is it?

Please, kind people who drop by here, don't stop visiting because there is a delay in updating this blog...Meanwhile, here are a couple of photos, taken last week, of May time in the woods and gardens of Temple Newsam... 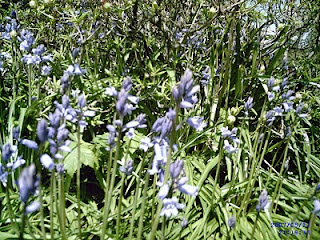 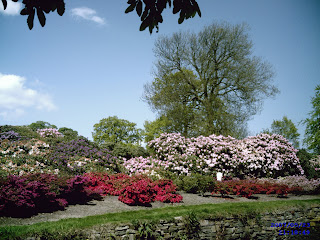 Posted by Christina at 23:55 No comments: 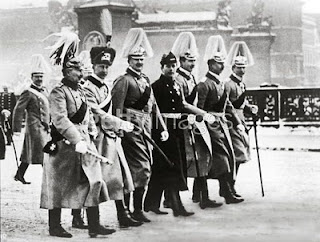 The Kaiser's sons were an interesting group of men, weren't they? There are strange parallels with the sons of Britain's George V. An eldest Crown Prince/Prince of Wales who clashed endlessly with his father; a lonely young man who became overweight to compensate for his sense of being misunderstood; a son who contracted a morganatic marriage (around the time the Kaiser was visiting Franz Ferdinand, whose morganatic marriage was such a burden to him); a son who suffered a nervous breakdown (or shell shock??) during World War I; a son who was gay and a son who became addicted to alcohol and gambling (and eventually killed himself). It's endlessly fascinating the way that family patterns work out in the next generation and the next and the next until someone breaks the chain and says, "Enough!".

For any soldier serving in World War I, the horrendousness of the situation must have been unbearable but that trauma must have been multiplied for a son of the Kaiser, coming home to a country in turmoil, and all you once believed and lived being swept away in so short a time. Imagine being the son of a man who was such a bundle of contradictions, who envied you and maybe loved you and played you off as a pawn against your grandmother and then whose throne was swept away and all you had been brought up to believe would one day be yours had suddenly turned to dust!

What's fascinating, though, is that the children of Tsar Nicholas II had a father who simply loved them and had nothing to prove. George V and Kaiser Wilhelm had major 'hang-ups' and their children seemed to bear the brunt of it....Family patterns, following family rules - so much 'stuff' being placed on the shoulders of the next generation - from a psychological point-of-view it is endlessly absorbing and there is so much to learn....
Posted by Christina at 23:51 2 comments:

Thank you so much for dropping by! This apparently dormant blog is only temporarily on hold due to domestic circumstances and family health stuff taking up so much time. Please don't stop calling by because it will continue shortly and, in the meantime, may I wholeheartedly recommend Abraham-Hicks and thank you for continuing to visit!
Posted by Christina at 22:48 No comments:

Email ThisBlogThis!Share to TwitterShare to FacebookShare to Pinterest
Labels: Abraham-Hicks

A Wise and Humorous View

From some old film vaguely remembered from childhood there was a line that said miracles aren't extraordinary feats of nature but simply something that happens at the right time. The internet is filled with so many so-called miracle-workers who make all kinds of promises of success, happiness and prosperity that, especially for a typically cynical Northern English person, they look like a load of scam artists.

In the midst of all that, there occasionally comes something truly wonderful and, after months of seeing 'Abraham-Hicks' coming up in the 'recommended for you' on YouTube, I began to watch those videos a month or so ago. This is something else altogether! Never, after years of studying theology, religion, psychology, nursing, healing, health and anything else that is available, have I heard such profound wisdom with such brilliant humour.

Esther and Jerry Hicks, whom I do not know personally, look like an ordinary couple. From a hard old industrial area of the north of England viewpoint, if you see their webpage, they look like people on loads of other 'American' sites who are kind of too-nice and too-glossy. A year or so ago they visited Europe and the 'Independent' reporter wrote a scathing review, pointing out that they live in some style (and why shouldn't they? They ask for nothing and so much of their work is available on YouTube at no cost!). If you would care to listen to them for even a brief while, it's so clear that such brilliant wisdom is neither cult-like nor self-aggrandising, and is absolutely to the point of what life is really about. Thoroughly uplifting and truly beautiful!

Please don't be put off by the idea of channelling or the notion of something spooky going on! It's not about that. In the way questions are immediately answered, Esther either speaks through the inspiration of the Divine/Source/God or she is one gifted human being to be able to turn things around so quickly! Personally, I believe the former.

Discovering such amazing understanding is miraculous to me and, as a former theology student, I have to say 4 decades of ploughing through old manuscripts and so-called knowledge and dreary theologies, never came close to this simple wisdom and joy!