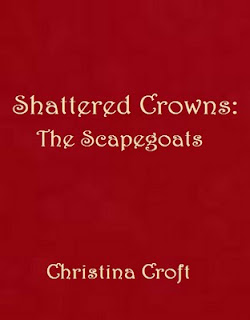 I am delighted that within a day or two, my novel: “Shattered Crowns: The Scapegoats” will be available via Kindle, and will available in paperback in about a month. The cover posted here, is a temporary cover for the Kindle edition.
As I wrote in a previous post, “The Scapegoats” is the first in the ‘Shattered Crowns’ trilogy which follows the royalties of Europe through the years 1914-1918. The Scapegoats covers the periods from April 1913 to the outbreak of the First World War. Archduke Franz Ferdinand, Emperor Franz Josef, Archduke Karl, Kaiser Wilhelm II and Tsar Nicholas II feature most prominently in this novel, an excerpt from which, I include below (and will include further excerpts over the next couple of days.

This excerpt is part of a conversation between Archduke Karl and his uncle, Archduke Franz Ferdinand. It takes place during a winter ball where the two men have escaped from the chatter of the ballroom and, as they discuss the fate of Crown Prince Rudolf, Franz Ferdinand gradually reveals his suspicions that he will soon be murdered:

....Eventually, [Franz Ferdinand] turned and said, “In the past, I believed that kings and emperors made all the decisions for their people. Now, though, I see it very differently. For the most part, monarchs are merely the actors who take centre-stage. Their lines are scripted for them and their movements are stage-managed by faceless people whom the audience never sees. Even in an autocracy like Austria-Hungary, so much goes on behind the scenes where ministers and politicians plot and intrigue among themselves. They see their monarchs as little more than puppets. They make plans that suit their personal ambitions and increase their own sense of power, and they manipulate their emperors into accepting and implementing those plans at whatever cost to their countries. Then comes the cruellest part of all: when the drama turns into tragedy, these people withdraw into the shadows leaving the emperor to shoulder all the blame.”
Karl frowned, “I cannot believe that an emperor anointed by God could be so easily influenced.”
“Most emperors who take their coronation oath seriously have the good of their people at heart but even the most astute of them cannot see with his own eyes all that is happening across his empire. These shady people know that; and so, with carefully woven words, they persuade him that unless he follows this course or that course, the country will suffer. They conceal things that they don’t want him to know and they scare him into accepting their ideas.”
“Scare him!” Karl laughed in disbelief.
“Yes,” Franz Ferdinand nodded emphatically. “The ability to inspire fear is the politician’s most powerful weapon. Men react totally irrationally when they are afraid. Even in Biblical times, wasn’t it fear of losing their authority that prompted the Sanhedrin to hand Christ over for crucifixion? And wasn’t it the fear of repercussions from Rome that prevented Pontius Pilate from setting him free? Imagine being able to harness that fear and twist it to your own ends. That is a tactic that politicians have mastered. Create an enemy, create something or someone to fear, and then persuade the people that you alone can protect them from the impending disaster. If the people believe you – and skilled politicians ensure that they do – they will do whatever you ask of them: they will fight your wars, pay your taxes, and allow their own freedom to be curtailed, all the time believing that you are acting for their highest good.”
Karl ran his hand across his brow.
“These politicians employ the same tactics when dealing with their emperors. They say, ‘unless you implement harsh laws, more people will suffer’ or, ‘unless we take up arms against this country or that country, we will be invaded,’ and all the time, unbeknown to their king, they are striking deals among themselves or with their foreign counterparts.”
“But why?” Karl blinked, “Why would they do such a thing?”
“Money, power…”
“And for that, they would not only betray the trust of an emperor but also endanger the welfare and lives of their fellow countrymen?”
Franz Ferdinand smiled at him gently and spoke in the tone of a patient schoolmaster to an innocent pupil, “The more noble the emperor, the easier it is for the unscrupulous to take advantage of him. Good men, who act from the highest motives, believe that those around them are equally noble. I hate to disillusion you, Karl, but the truth is that there are many ambitious and self-seeking men in positions of authority. Who would have believed that someone like Redl, on whom so much of our country’s security depended, would sell us out to protect his pathetic reputation and to fund his lavish lifestyle?”
“That was a particularly unpleasant case.”
“Believe me, Redl is not the only one who would be willing to sacrifice all that we hold dear to further a greedy ambition. Every day secret agreements are reached between politicians, arms manufacturers, bankers, spies and newspaper proprietors. There are always people who place their personal gain before the good of the country.”
Karl returned to the table and, sitting down, rested his head in his hands. The evening had begun so brightly in the glamour of the ballroom, yet now, alone with his uncle, he felt suddenly drained and exhausted.
Franz Ferdinand came to stand behind him and rested an avuncular hand on his shoulder, “I am so sorry, Karl,” he said softly. “I didn’t intend to distress you but men in our position must see what is going on or there is no hope for our country or our people.”
A line from the Gospel ran through Karl’s mind, ‘I am sending you out like lambs among wolves; be as wily as serpents and as gentle as doves....’
Posted by Christina at 19:24

Thank you so much for sharing this!