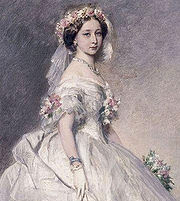 Princess Alice has always intrigued me, not least for the contradictions in her character. This fascinating woman has often been presented as little more than a footnote in history - merely a daughter of Queen Victoria or the mother of Tsarina Alexandra. A dedicated philanthropist, who devoted herself to the service of the poor, she was simultaneously attracted to beautiful jewellery and earned her mother’s censure for her love of ‘fine society’. Unorthodox, yet profoundly spiritual, she, who wrote of her resignation to the will of God in the most heartrending circumstances, was accused by the Prussian Queen of atheism, and was not ashamed to be associated with one the most controversial theologians of the age. She loved her children deeply and was devoted to her husband, yet her marriage became increasingly unsatisfying and, as she told the Queen, being a wife and mother did not come naturally to her. Unconventional and unafraid of involving herself in taboo causes, she was ever conscious of the privileges and responsibilities of her royal status; and, while inspiring devotion in the people whom she selflessly served, she was criticised, too, by those closest to her for her outspokenness and inability to endure a lack of commitment in others.
daughter of Queen Victoria or the mother of the Tsarina - and, due, perhaps, to her early death and the bereavements and losses she endured, she is often seen as a rather sombre character, somewhat sickly and rather dour. In fact, the opposite is true - she was renowned for her cheerfulness and sense of humour, and, far from the ascetic persona that has often attributed to her, she was a passionate aesthete and deeply emotional person.
What is most intriguing, however, is the way that Alice demonstrates that the endless criticism of Queen Victoria & Prince Albert's parenting, is utter nonsense. The greatest tragedy of Alice's life was not, in my opinion, the bereavements she suffered or her own early death, but that fact that her childhood was so blissful and idyllic that nothing that came afterwards could ever match it.
In my forthcoming biography, Alice - The Enigma, I hope to have captured a little of her essence and have sought to delve into that enigma in the hope of gaining a greater understanding of such an interesting person. 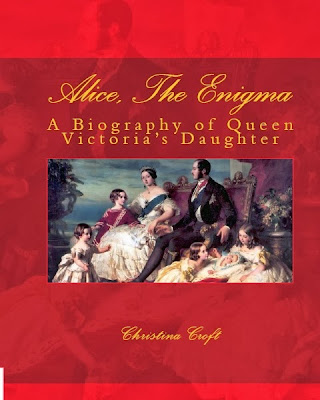 Congratulations on your new books, Christina!