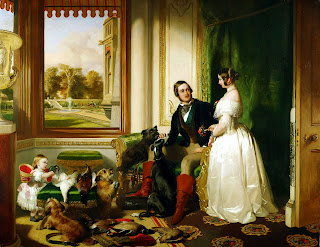 The beautiful letter from Prince Albert to Queen Victoria, which is to go on display at Windsor Castle, surely contradicts all the nonsense written about the Prince being forced into the marriage, and the idea that he was simply some kind of control-freak who wanted to rule everything! So much is written about Queen Victoria’s adoration of her husband, yet so little is mentioned of his feelings for her, and this letter demonstrates that their love was mutual and passionate. Far from being the dull prude of popular imagination, it demonstrates, too, that Prince Albert was a passionate man whose fidelity to his wife sprang not only from his high moral values but also from his genuine love for the Queen.
At last, an article which nears the truth about the Queen and Prince: Prince Albert's Letter
So different from the balderdash proliferated in such sweeping and unjust articles as this:  Complete and utter judgemental balderdash!!
Posted by Christina at 11:26

I always loved Prince Albert, and thought he was a very decent human being, who also did so much for England and the world. This just reconfirms it for me even more :)

Thank you for commenting, Helen. I absolutely agree about his being a decent human being who dedicated himself to the service of this country and tried so hard to ensure that there would be peace in Europe and the world.