In all the aftermath of the EU referendum, amid all the name-calling, blame and more sensible calls for unity, something has concerned me, which I don’t think has been mentioned. On several programmes, attention was frequently drawn to the fact that the South East and especially London would vote to remain because the people there are better-educated! I am aghast at this for two reasons. Firstly, it implies that northerners are somehow uneducated; and secondly because it suggests that all educated people would vote remain. I am also aghast at the truly unpleasant insults that have been hurled at those who voted to leave, primarily insisting that they are either racists or ignorant. There is no point in going over the old arguments about why leaving was – in my view – a good thing, but it appears that this issue has raised more political passion in this country that I have ever witnessed in my lifetime and has also highlighted many deep divisions within the country. For years the main political parties have been so similar to one another that there has been little to choose between them. Perhaps this is the wake up call that the country needed to discuss all the issues which concern us, in a more balanced way. To me, the fundamental problem lies in the fact that many politicians do not view themselves as representatives of the people, or as public servants, but rather as rulers who have greater intelligence than the rest of us; and also in the fact that we have to accept that within any country there will be conflicting views. In my experience, the smaller the institution, the more successful it is because the people within it feel ‘known’ and feel that their views count. Smaller schools, for example, have been shown to work better than huge schools with thousands of pupils. In the same way, a smaller state works better than a huge one. This does not mean that smaller businesses, industries, schools, countries etc. etc. cannot work amicably together, rather that individuals need to feel that they have been heard. At the end of the day, we had a referendum in which we were all entitled to vote. An outcome was reached and the only way forward is to put behind us the unpleasantness and start building upon what we have, creating and maintaining good relations with other nations, and respecting that, however small the majority vote was, it was a majority. May I suggest, too, that there is a rethink on the ‘uneducated masses’ of the north...the places which produced William Wilberforce, Judi Dench, the Brontes, J.B. Priestly, Delius, John Atkinson Grimshaw, L.S. Lowry, Henry Moore, Andrew Marvell, James Brindley, Charles Halle etc. etc. Now I must don my flat cap and feed my whippet before setting off down ’t pit..eh-up!

By the way...my latest book "Queen Victoria's Cousins" is available now in Kindle and paperback versions: 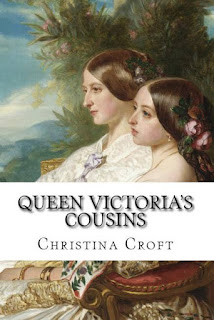 Greetings from across the pond. I only just found your blog and what a pleasure it is to read. I quite agree with your opinion and will add that it is common here as well that people will use the most ridiculous argument especially in defeat. Personally, I think it is a ploy used by the left as a tool to divide. They tend to use lies and will continue to repeat them with the hope that people will believe it. Be that as it may, I am glad that GB voted to get out of the EU and I feel strongly that things can only get better.

Please forgive my very very tardy response to your kind comment. I am so glad you agree. I just hope the outcome is exactly what we voted for!

You say: "On several programmes, attention was frequently drawn to the fact that the South East and especially London would vote to remain because the people there are better-educated!"

If this is actually the case, I agree with you that it's reprehensible to promote such geographic division.
But it's simply not true that "the southeast" voted Remain. Essex was particularly strongly "Leave", and many people I know from the Home Countries were too.
Conversely, the "northern" city you live in voted Remain; so did York; so did Harrogate; so did Newcastle; so did Manchester; so did Liverpool.

There is actually a documented correlation between higher levels of education and voting Remain. If someone has suggested that this educational difference is based on geography, they are obviously mishief-makers. I personally didn't hear it suggested, though I heard plenty of things that annoyed me - on both sides - during this campaign, and one of the things was the suggestion that everyone in "the north" voted Leave.