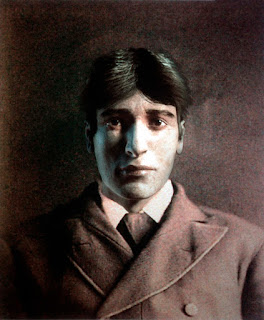 Nowadays, in our age of celebrity culture, where some people are famous purely for being famous, and being young(ish) and physically attractive seems sufficient to make a political leader worthy of praise, newspapers regularly publish stories of the doings of people whose sole claim to fame is their appearance, and it is bizarre that they gain a following on social media. Ironically,  Beauty and the Beast has made a big comeback, perhaps because we are tiring of the superficiality of judging solely by appearances and actually listening to what people have to say. Looking at the picture of what Joseph Merrick would have looked like were it not for his condition, it is tragic to think that behind those pensive eyes, was a man who was clearly more beautiful than all those who screamed on seeing him in the freak show. Who were the real freaks?
Posted by Christina at 11:06