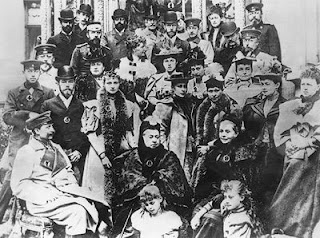 If, in the midst of organizing Christmas gatherings and accommodating various - sometimes contrary - characters in families, it is worth sparing an amused thought for Queen Victoria and the challenge she faced in the organization of her Golden Jubilee celebrations. Apart from the representatives from so many corners of her Empire, the more pressing concern was where to house and seat different members of her own family.
Buckingham Palace itself was bursting at the seams; the Duke of Edinburgh had offered the use of Clarence House, and the Prince of Wales was open to guests at Marlborough House. Nonetheless, it would require very careful and tactful planning to ensure that everyone was housed with 'suitable' companions.
Her grandson, the future Wilhelm II, was originally not invited, since his father, the future Frederick III, would be representing the Kaiser. 'Willy' however was angling for an invitation and, to keep Willy's mother, Crown Princess Victoria, happy, Queen Victoria agreed to invite him. He would have to be kept away from his aunt, Beatrice, and his cousin, Victoria of Hesse, since their husbands were 'Battenbergs' and, to Willy's mind, not sufficiently royal or 'of the blood'. His own sister, Moretta, was as that time, still hoping to marry a third Battenberg brother, Sandro - a notion which Willy and his paternal grandfather refused to even consider.
Willy's father, diagnosed with throat cancer, needed to be housed in a place where he could enjoy quiet after the celebrations; and then there was Willy's sister, Charlotte, who was known for making a scene and for whom, the Queen decided, the possibility of staying with her Uncle Bertie - with his 'fast set' - at Marlborough House was hardly appropriate.
Much as the Queen was looking forward to meeting Ella (Grand Duchess Elizabeth) again, she was certainly not so enamoured at the prospect of having to entertain Ella's husband, Serge.
On top of a myriad of other children and grandchildren and their spouses, were the Indian Maharajas and the splendid Queen of Hawaii (whose position in the order of precedence irked Willy, who ridiculously believed that a European prince should come before a black Queen!).
All things considered, the average family gathering is very easily arranged!
Posted by Christina at 13:34

Thank you so much for leaving a comment on my blog, it means a lot. I have enjoyed reading your posts on this blog, and I will be visiting your other blog's as well.
Grand Duchess Elizabeth is a character in history that until I read the book I posted on, I had no other knowledge about. She was a lovely and gracious lady.
I have read countless books on the British monarchy, but until recently had no real knowledge on the Russian monarcy, I enjoyed my mini-study.
Please visit again!
Happy New Year!

It was a delight to visit your beautiful blog and I shall return there often! (I am placing a link to it on our other blog - which has more visitors than this one :-) ).
Thank you so much for commenting here! Ella truly was a remarkable woman and it saddens me greatly that she is so little known. I see people pass beneath her statue at Westminster Abbey and it is even more poignant that so few know anything about her. (I hope my book helps to rectify that, too!).
HAPYY NEW YEAR TO YOU!!