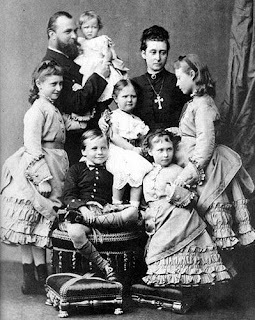 On December 14th 1861, England lost the greatest king we never had, and Queen Victoria was plunged into mourning for the untimely death, at the age of 42, of her 'beloved angel', Albert.
The mourning continued for many, many years; his night shirt was laid out on his bed ever evening and his shaving water changed each day, and Queen Victoria withdrew from public life for so long - unable to 'face the world alone' - that public patience ran out and a sign was placed on Buckingham Palace gates, saying: "Situation Vacant".
In the immediate aftermath of his death, his second daughter, Alice - mother of Grand Duchess Elizabeth - was the one who held the family together and sustained her mother through those early weeks. Alice was particularly close to her father and resembled him in many way - both exhausted themselves in the service of their countries, and had an overriding sense of the responsibility that came with their privileged positions.
Two years after Prince Albert's death, Alice - now married to Louis of Hesse - write to her mother:
"Pray for me when you kneel at his grace - pray that my happiness may be allowed to last long; think of me when you kneel there where on that day my hand rested on your and Papa's dear hands, two years ago. That bond between us is so strong, beloved Mama. I feel it is a legacy from him."
Seventeen years to the day after her father's death, Alice - having exhausted herself caring for her family who had been struck with diphtheria, succumbed to the illness herself. She had been virtually unconscious for some days when, on 14th December 1878, she opened her eyes and murmured, "Dear Papa!" He had come to take her home.
Posted by Christina at 10:53