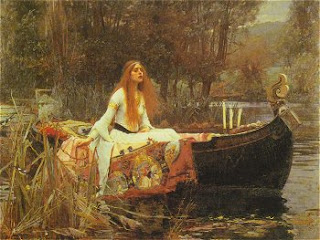 In the midst of the Industrial Revolution, the Pre-Raphaelite artists - like Waterhouse, whose painting is posted here (and if that infringes copyright, I will remove it.) - seemed to withdraw from the world in order to create images of a time where values were very different. Unlike the society in which they were living - one based on turning humanity into a great machine - they created images of a mythical part, the legends of King Arthur, Camelot, that dream that is within all of us, and which the past two centuries seem to have destroyed.

There's no doubt that it was necessary for society to change. The population had increased and, with the move to the towns and cities, it was no longer possible for small villages simply to provide enough to live one year out on subsistence farming. It was surely a kind of evolution but one that - to me - took an off-course turn. Paradoxically, when people were herded into slums and the squalor of the new, ill-prepared cities, masses of humanity were crowded together and rather than that drawing people closer, it simply shut down any sense of personal worth or identity. Previously, living in space, there was room for personality, room for individuals, room for the 'village idiot', the crone, the eccentric; room for people to just be whoever they were.

We have lived with that legacy ever since and turned humanity into a mass of ants all running one way to work, in rush hour, then running back in the same direction at the next rush hour. Animals were fatted beyond their natural way of being, then placed in battery farms; living, feeling creatures seen as nothing but cogs in this wheel. And into this step the power-seekers who say that we need to live in fear; we need to fear outsiders - terrorists, disease, epidemics or whatever form 'outsiders' take - and only those in power can keep us safe by keeping us in these confines and adding more and more restrictions. The arrogance of claiming that little man is greater than Nature in Her seasons of ice ages and warm ages and tides and ebbs and flows, has been used as yet another means of lulling us into a sense of being needy and needing a patriarchal government to step in and 'save' us from ourselves.

It seems to me that the whole Mother Earth and God Himself (whatever one's conception of a Deity/Humanity/Spirituality) is rising up against this. Sounds a little off-the-wall but as the banks collapse, as the hypocrisy of politicians becomes clearer, as churches are emptying and the old institutions are crumbling, there is a kind of Armageddon going on. It's pretty obvious who will triumph in this whole debacle. On the one side, there is a little 'Wizard of Oz' sort of power-seeking that has been lulling people to sleep for decades. On the other, there is the millions of years old wisdom of ages that expresses in individuals and in the need to wake up to who we really are. Most people don't want wars, don't want to live in fear of one another. Most people are capable of making their own choices....

We don't need a King Arthur; we surely do need to recognize our own worth. And for that I love the Pre-Raphaelites.
Posted by Christina at 23:26