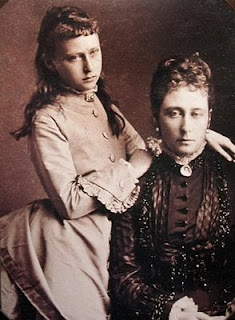 It seems to me that the more we swim against the tide or try to force our idea as to how things could or should be, the more frustrated we become. Perhaps it is for this reason that so many religious people resign themselves to 'the will of God' in such a negative way.

Dear Princess Alice, mother of Grand Duchess Elizabeth and Alix, the last Tsarina of Russia, seemed to struggle for so long, trying to make sense of her beliefs and following paths that led her away from orthodox views. The death of her little son, Frittie, somehow curtailed all of that and she resigned herself to 'the will of God' and died of diphtheria and exhaustion (or despair) at the age of 35. She was deeply mourned. She had spent her short life in Hesse not only raising her family but also doing all she could to care for the poor. A deeply feeling human being, she was a talented musician and of a poetic nature with a great sense of humour but I believe she went so far in her soul-searching and then, due to the pressures of the era (where the superficial Queen of Prussia labelled her 'an atheist') and the immediate circumstances of her life 'resigned' herself to the 'inevitable' and the orthodox views of religion and consequently literally choked to death over it.

Her children caught her soul-seeking and continued from where she left off. The saddest part of it all, is that two of her daughters who might have been so close and so mutually supportive, ended up opposing one another. Alix, the Tsarina, following the path of the mystical and the desperate at the same time; and Ella, following the path of the mystical and the need to be within a set regime. All these beautiful soul-searching people, working out their understanding and their own realities...The external events are hugely interesting but the inner lives are endlessly absorbing as they play out in all of us sooner or later, I think.
Posted by Christina at 23:21