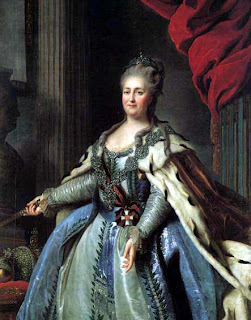 It's fascinating that, throughout history, when a woman gains prominence in politics or leadership, some kind of backlash attempts to destroy her, usually through accusations of either madness or frigidity or wantonness. Is that the first recourse of humanity in its attempts to denigrate the role of women of the past?

It goes back a very long way - right back to the time when peoples generally worshipped a feminine form of God, and the Goddess was immediately undermined by the authors of the Old Testament, who took all the Feminine understanding and decried it in the myth of Eve bringing sin into the world by eating the apple and tempting Adam to do the same. And so it continued...Mary Magdalen (and I am not a believe in the simplistic explanations of 'The Da Vinci Code' or the book upon which that story was based "The Holy Blood and the Holy Grail') was assigned the position of reformed sinner. Eleanor of Aquitaine is better known for her love affairs than the brilliance of her adventurous life. Joan of Arc was either hysteric or possessed by demons. People delved into the reasons why Elizabeth I, probably the greatest monarch England ever had, never married. It couldn't be simply that she was politically astute enough to know that any marriage would involve a difficult alliance or that her authority would be undermined, it had to be that there was something physically wrong with her. On a very different level, when they wished to condemn Marie Antoinette, they accused her - oh how cruel that was!!! - of abusing her little boy, whom she loved. When Catherine the Great - undoubtedly the most brilliant monarch of the 18th century - passed on, bizarre and ridiculous stories emerged about the cause of her death. The suffragettes, with their well-thought-out arguments and perfectly logical reasons for expecting that women be allowed to vote for laws that affected them and their children, were portrayed as bitter old spinsters. What is it that simply cannot tolerate a powerful woman? And if one speaks up for powerful women, even today one is immediately branded a feminist (which I am not).

Catherine the Great was, in my view, an incredible person. Long before Alexander II's reforms, she wanted to liberate the serfs but had an overview of the whole political situation and how it would play out that she couldn't proceed with it. She was massively interested in bringing education, literacy and new inventions to Russia, (she paid for all her footmen to learn to read, I believe, so that they wouldn't be bored when standing around in corridors) and also (rightly or wrongly) succeeded in expanding the Russian Empire to the shores of the Black Sea. She believed wholeheartedly in creating the stability of the Romanov dynasty and - were it not for the French Revolution, which shook her a lot - I think she would have gone much further in liberating the serfs and even creating an early form of constitution. The Revolution - for which Nicholas II is often so unjustly blamed - really has its roots in Catherine's successors: her silly son, Paul, who so hated his mother that he made a law banning women from the throne and was most unsuited to rule; Alexander I, who wavered on everything, far more than Nicholas II ever did. Nicholas I came to power in the midst of a revolution, and when Alexander II succeeded him, he tried to adopt more liberal views in order to uphold some kind of order, and for his efforts was blown to bits. The Russian Revolution, which is so often laid squarely at Nicholas II's feet, had its roots many years before he was even born. Nicholas was probably closer to Catherine the Great than any of his predecessors, and had she only been around in his time, the outcome might have been very different.
Posted by Christina at 23:25

Email ThisBlogThis!Share to TwitterShare to FacebookShare to Pinterest
Labels: Catherine the Great, Elizabeth I, Joan of Arc, Tsar Nicholas II