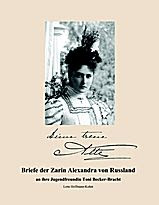 While reading a translation of some of the diaries of a member of the Russian Imperial Family, recently, I came across a statement by the translator which said something to the effect of, "The rest of the diaries are more of the same - incidental and uninteresting details about everyday life." I was horrified by the word 'uninteresting' because the incidental details were far more fascinating than widely published major events.

Some editors of letters seem quite cold with respect to the authors of the letters. Perhaps these are privileged people who are blessed to have access to some archives but don't really care for the person about whom they are writing. I have read a couple of books where the editor's notes intrude on the letters themselves and make snap judgements about what was going on (rather reminds me of a line from T.S. Eliot's poem "and that isn't what I meant at all..."). On the other hand, I adore Roger Fulford's collections of the letters between Vicky (Empress Frederick of Germany) and her mother, Queen Victoria, because the editor includes notes at the beginning but makes none of those horrid intrusions. "A Lifelong Passion" - the letters and diaries of various members of the Imperial Family - is equally beautiful! (These are the books which - along with "Le Petit Prince" by Antoine de St. Exupery and "Science of Mind" by Ernest Holmes" - that I would take to a desert island if I knew I were to be stranded for some time!).

I have just heard of what must be a wonderful collection of letters between Alix, the last Tsarina of Russia and her long-time friend, Toni Becker. Since this collection is compiled by Toni's granddaughter, Lotte Hoffmann-Kuhnt, it is sure to be written with deep respect and love and none of the intrusion. This will surely be priceless treasure to anyone interested in the Romanovs and who cares about the truth beyond the fiction!