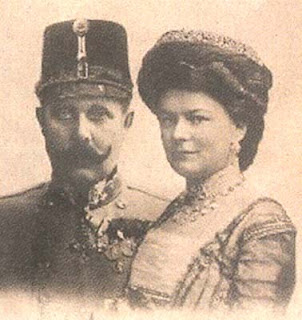 Following the murder of Archduke Franz Ferdinand, whose death was the catalyst to the outbreak of the First World War, a member of the 'Black Hand' (the group responsible for his killing) wrote an open letter which, while claiming that the act was patriotic rather than criminal, stated that he was unaware that the Archduke was a father and he was greatly touched by Franz Ferdinand's last words to his wife, "Sophie, you must live for our children." (Sophie, by the way, had just died at the hand of the same gunman).

That line from the Black Hand member is so telling. There is no doubt that the Serbs felt oppressed by the way that the Slav people of Bosnia Herzegovina had been amalgamated into the already crumbling Austro-Hungarian Empire and they had every reason to feel aggrieved but, at the same time, Franz Ferdinand had gone to Sarajevo with high hopes of eventually granting a kind of federal autonomy to the region. The members of the Black Hand did not see him as a human being, but rather as a symbol of an empire. They 'did not know that he was a father' - that says it all. They did not see him as a human being at all.

And so it is with all wars. Forgetting they are killing human beings who have lives, families, people who love them and whom they love, soldiers and terrorists are taught and trained to become dispassionate and see only 'causes'. It is a de-humanising thing and it has never achieved anything...and on and on it goes and every war is always seen as 'just' by both sides.

Franz Ferdinand is often viewed as a bad-tempered man whom few people liked. I think his utter devotion to his wife and children, his many interests, and his desire to create harmony among the many different cultures in Austria-Hungary far outweigh his short-temper. He was fascinating but, like Tsar Alexander II of Russia, a man who might have brought about peace in his empire and created contentment among his people had to be murdered by radicals who were so obsessed with their 'cause' that a mediator was more frightening than a tyrant.

There is an incredible irony that a man who - for marrying 'beneath him', a woman he deeply loved - was always an outcast in his own country, but that country then went to war - at the cost of millions of lives - over his murder.
Posted by Christina at 23:05

I like your world view! It's a mistake, I think, to judge historical events by modern standards. As you say, in their time FF and Alex 2 were relatively good guys. It's the other side of the same silly coin which would no doubt have modern Italy apologising for the Roman suppression of Boudicca!