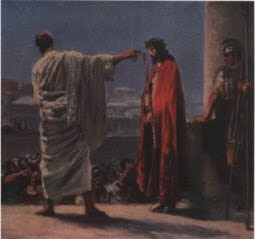 There's a profound irony in Pontius Pilate's question, "What is Truth?" isn't there? Whether it was said as an attempt to dismiss the profundity of the Man he was about to hand over for crucifixion, or asked as a genuine question, I don't suppose he really wanted to hear an answer.

It's a question that continues to haunt us through the ages. Looking through the annals of history, so little of what is perceived as 'truth' tells the whole story. Events can be reported factually but there is a great deal of difference between facts and truth. Events can be reported untruthfully, but there might be a grain of truth even in the lie. History is usually written by the victors but the victors' triumph is often temporary and a century or two later, someone arrives with a different version of the story.

After researching a little of the life of Franz Ferdinand (whose murder sparked the outbreak of the First World War) I find myself surround by so many different viewpoints about the subsequent events. The initial reaction is that so many people used his death to their own ends. There was the vile Montenuovo, who so cruelly sabotaged the funeral of Franz Ferdinand and his beloved wife by denying the public the opportunity to pay their last respects by arranging for the train, bearing their bodies home, to arrive late in the night and ensuring they had only the shortest time to lie in State (with Sophie's coffins considerably lower than Franz Ferdinand's). There was Von Hotzendorf baying for war, and Berchtold and the rest of the 'war party' using the tragedy to their own ends...and into the slaughter. These same people hated Franz Ferdinand and saw his death as a relief, while using it as an excuse to further their own ends in a show of self-righteousness. It's the 'truth' of little boys. The 'truth' of gangs and gangland killings and it is nonsense. It's the idea that 'truth' means upholding whatever we happen to believe and so it goes on throughout ages.

What if we all found our own truth? What if we turned to our own demons and outed them rather than projecting them; and then turned to our own beauty and lived it - lived our own lives and our dreams, lived our reality, without a need to make someone else wrong, or to avenge perceived attacks? Then, we would know the Truth and the Truth would make us free. Alas, in this world, we complicate so many things and make people innocent or guilty; decide that the world is wrong because it doesn't match our version of Truth; or else we hand over all of our power to ministers who, we think, know better than we do but who are really equally small beings seeking their Truth but, often, finding it easier to impose notions onto others than to look inside themselves and see what is driving them.

"What is Truth?" said Pilate.

"I am." sounds like the most accurate reply.
Posted by Christina at 23:42