While researching – for a new novel based on the life of Moretta of Prussia – I have been quite fascinated by the relationship between Bismarck and the German Emperor’s family and cannot help thinking of the irony of his ultimate downfall. The ‘Iron Chancellor’ is credited with having 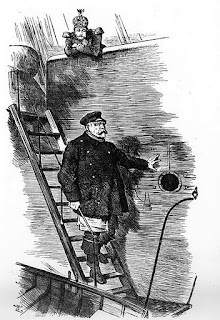 successfully brought about German Unification (though the part played by Crown Prince Frederick of Prussia – later Frederick III – was deliberately written out of the history of this) and he had undoubtedly a great deal of political nous and foresight (he predicted with uncanny accuracy that the First World War would occur twenty years after his fall from power and also said it would spring from some minor event in the Balkans). His methods, however, were utterly ruthless and while, on the one hand, he is seen as a great statesman who did a great deal of good for the people, on the other he sometimes seems to be a megalomaniac who would use any underhand means to dispose of his enemies. He deliberately incited various ethnic groups in Austria-Hungary to cause trouble for their Emperor; he deceitfully provoked the Franco-Prussian War, he suppressed any group which he perceived to be a threat to his plans (Catholics and socialists were his main target), and he often used invented scandals to destroy his political opponents.

“I wonder why he does not say straight out,” wrote the then Crown Princess Victoria, “ ‘as long as I live both Constitution and Crown are suspended’ because that is the exact state of the matter. No doubt his is patriotic and sincere and thinks it for the good of Germany. He thinks that a great central power is necessary and that one will must decide and that state be everything and do everything like one vast set of machinery – say the ‘Inflexible’ for instance where the captain works everything alone and directs the ship by electricity etc. So Prince Bismarck wishes, with the press of a little finger, to direct the whole....”

It is unsurprising that the Crown Princess (later Empress Frederick) was so opposed to the Chancellor. Not only were his policies totally contrary to her own more liberal views, and not only had he purposely side-lined her husband, but he had deliberately denigrated the Crown Princess herself, inventing scurrilous stories to destroy her reputation and, perhaps most cruelly of all, had played a major part in turning her eldest son – Wilhelm – against her.

To Bismarck it seems that Wilhelm was something of a puppet. Having flattered him as he was growing up and filled his head with a sense of his own importance, he (Bismarck) almost seemed to believe that he would always be able to manipulate his protégé. The fatal illness and untimely death of Wilhelm’s father must have appeared as a miracle for the elderly statesman who, even as Frederick was dying, was encouraging Wilhelm to step into his shoes as Emperor. In 1888, Wilhelm became Kaiser Wilhelm II and the Chancellor surely expected to be able to manipulate him as he had manipulated his grandfather. He was in for a rude awakening as the arrogance which he himself had fostered in the prince, was to turn against him as though like Dr. Frankenstein he had created a monster which he could not control.

I do not for a moment, however, think Wilhelm was a monster. In the days after his father’s death, he behaved appallingly – surrounding and ransacking the palace where his mother was grieving, in search of private papers; he then basically threw her out of the palace until, for a while, she and her younger daughters had no idea where they would live; he changed the name of the palace to obliterate his father’s memory and in his first speech made strong references to his grandfather but none whatsoever to his father. But Wilhelm’s relationship with his mother was extremely complicated. Bismarck had truly turned him against her and yet, on some level, as a chid and beyond he had adored her (even writing her disturbing letters which sound almost like love letters, and which she felt it prudent to ignore) and I cannot help wonder whether what happened next had something to do with his getting revenge on the man who had treated her so badly.

Far from being a puppet, Wilhelm had strong views of his own and – surprisingly, perhaps, to those who see him a a ‘warlord’ – one of his main concerns at the beginning of his reign, was the welfare of workers. Bismarck, in his determination to crush all opposition,planned to employ a strategy that he had employed before to good effect – he wished to provoke the socialists into an armed uprising so that the police/armed forces could be called in to crush them completely. Wilhelm, who was far more sympathetic to the workers’ demands, was appalled when he discovered this plan and absolutely refused to turn his troops on his own people. Eventually he left the Chancellor no option but to resign. His unceremonious departure must, on some level, have given Wilhelm the sense of having repaid him for his treatment of his parents. The most ironic part of all – true Karma! – came when Bismarck approached Wilhelm’s mother, whom he had treated so badly for so long, and, in desperation, asked her to speak on his behalf to her son. Empress Frederick – without any bitterness (she actually wrote that she felt sorry for Bismarck) – replied in all honesty that she had no influence whatsoever over Wilhelm since Bismarck himself had deliberately destroyed the bond between them.