I was fascinated to read of the novels of Peter M. Cooke, author of the Murphy-Arcadelt Chronicles - a series of seven novels spanning the years 1900 to 1963 and following the fortunes of two families whose lives are intertwined - as I am unaware of any other novel or series which features the Salvation Army at the beginning of the 20th century. To my delight, Mr Cooke has kindly written this guest post, describing the inspiration for and background to his work:
Maggie's Tale 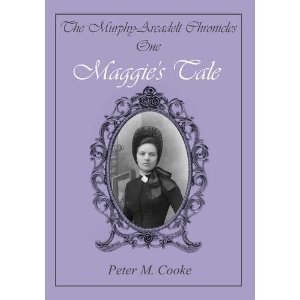 "I've been a member of The Salvation Army all my life -- my parents came into it in their early childhood. Their own mothers were members, though they lapsed soon after marriage.


I've always had affection for 'the Army'; I've made a study of its history; I've contributed to its periodicals. Came the time when I felt a career change was called for, then I worked for it full-time, discovering talents I never knew I had. I worked first in its Editorial Department, and then in the Literary Department, helping to produce its books and periodicals -- assessing manuscripts; 'marking-up' copy for the printers and 'making-up pages' (in the days of 'hot metal' -- now long gone, of course); proof reading and so forth.


One colleague, Norman, and I often had 'coffee-time conferences' when we talked about the books we'd like to write and books we thought 'the Army' ought to publish (not always the same thing, of course). As a result of one of these I was given the task of writing the biography of one of its outstanding composers, Eric Ball. On another occasion Norman said he'd like, when he retired, to write a novel about 'the Army', though when I reminded him of this he'd forgotten all about it. But I'd already had the idea of writing 'an everyday story of "Army folk"' for The Salvation Army itself which had been turned down.


Some months later I travelled north from London to my home town of Nottingham to attend the funeral of my father's youngest sister -- Nellie -- the last survivor of the seven siblings who made up my father's family. There came into my mind again the idea of a novel about 'the Army', and, like a flash, the idea of making it an historical novel, with several of my parents' siblings sketched into it. Thus, the two maids-of-all-work in my book Maggie's Tale are my two grandmothers, who as girls were house maids, and seeing a Salvation Army procession go by the window went to find out more; Bridie, in the second one, is based on my father's eldest sister, Lottie, whose intentions to be a full-time officer were never fulfilled; Harvey, in several of the books, is basically my father's brother Harry, who was told by his fiancee that he 'could have either "the Army" or me, but not both' -- and who made a wrong decision. And later regretted it.... And so on.


In the first of the seven, Maggie's Tale, we find the two girls, maids of all work, Maggie Murphy and Lucy Wibberley, linking up with the organisation when it starts work in their town in 1900; losing their positions because the salvationists are not considered respectable; applying to become officers; what happens to Lucy when she's accepted, and to Maggie, when she isn't.... In the second, Cosmo's Tale, we meet Cosmo Beresford Arcadelt, who gives up a life of Downton Abbey-like privilege when he joins its ranks, and learn of his marriage to Lucy; also of the growing-up of Maggie's two daughters, Bridie and 'Little Lucy'. In the third, Harvey's Tale, we find his elder brother, Wennie (short for Wenceslas) dealing with a broken romance, and Harvey himself making a disastrous marriage.... And so on.


Time and space are insufficient to tell of the remaining four, which take the story of the Murphy and Arcadelt families forward to 1963. Sometimes actual events in Salvation Army history are woven into them. Each one is of a uniform length and format - about 76,000 words in nine chapters.
-- Peter M. Cooke


The ending was masterful and came as a complete surprise. -- F.L.


You described the various characters in such detail that they really came alive to me. -- M.P.


...writes with the eye of the poet for detail, but produces the fast-moving story of the novelist.... -- P.D.P.

...succeeds in bringing early SA history to life in his well-researched, fictional account. ...an interesting way to introduce today’s Christian soldiers -- whether Salvationist or not -- to the fascinating world of early SA courage and determination in the land of the Army’s birth and beyond. -- EM (USA)


...a fabulous idea to write an Army-based fiction. ...really enjoyed following the story against the historical and social background. -- DB