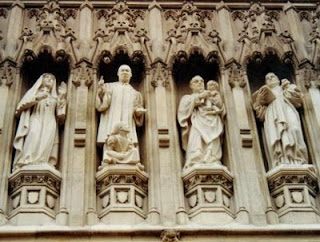 Our cities are filled with statues most of which we pass by, never knowing anything about what or whom they represent. It's lovely to see the instantly recognizable Queen Victoria in most English cities, and then there are forgotten soldiers and heroes of wars that are now politically incorrect but who mattered once, and occasionally are moved or hidden away, according to what is acceptable in any given age. Churches are filled with statues that bear no resemblance whatsoever to the lives of the saints they are supposed to represent - gentle smiles and uplifted eyes as though they suffer nothing in the midst unspeakable torture! - and all the same, I love statues - they tell stories.

One day, I went to Westminster Abbey in search of the statue of Ella - Grand Duchess Elizabeth. After searching every nook and cranny (and finding some amazing stories but unable to find Ella) I gave up, disheartened, went outside and, sitting in the sun (a rare sight that summer!), looked up at the sky and saw her among the other 20th Century martyrs above the West Door. It took me by happy surprise - always looking the wrong place and then finding what I was looking for when I gave up trying. There was something poignant about that, too...the thought of her being out of sight, in second place...a bit like those statues that are lost beneath leafy glades and overgrown parks - a footnote in history. And there is something that I think she would have appreciated about that - the kind of statue that says, "Yes, I did what I did. Maybe I made a difference for some people and I don't want to be centre-stage."

It rather reminds me of children running through poppy fields besides war memorials. The busy world goes on, we walk past statues and whether they are heroes, kings, villains or saints, it all just goes to making up life today. Statues make me think of the athletes in races who hand on the baton. Statues seems to say, "Okay, it's your race now...go on and take it up from where we left off...."

I wonder if, when Ella walked into the Abbey for her grandmother's Golden Jubilee celebration, she looked up at the door and had any inkling that one day her statue would stand there. I doubt she did and I'm glad it does.
Posted by Christina at 23:52