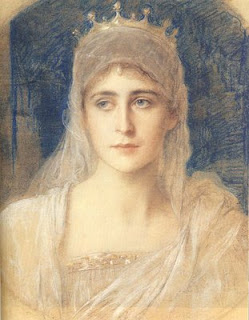 Today is the 144th birthday of Grand Duchess Elizabeth, whose birth shocked her grandmother, Queen Victoria, because the Queen felt her daughter - Princess Alice - should have waited longer before having a second child. The Queen was in for an even greater shock when she discovered that Alice had chosen to breast-feed her baby - something that the Queen considered unpleasant for anyone, and for a princess unneccessary and demeaning! So great was the Queen's annoyance that she ordered a cow in the royal dairy to be named Alice!
Posted by Christina at 14:44

Queen Victoria was a bit of a busybody, wasn't she!