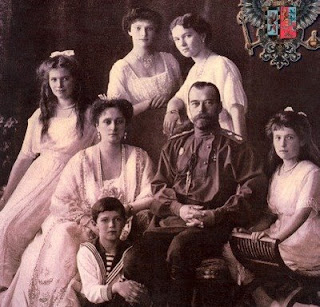 The docu-drama, "World War II, Behind Closed Doors" shows the manipulation and endless one-upmanship between Churchill, Stalin and Roosavelt. Sometimes it seems as those three men sat down and played a game of chess with people's lives. The masses of ordinary people were the pawns in the game, all believing they were fighting for the good of humanity.
When the programme shows interiors of the Kremlin Palaces and shows Stalin walking down those corridors, I cannot help but think how history wrote of 'Bloody Nicholas' - a man who loved his people, who abdicated to prevent a civil war and so as not to abandon his allies - and compare it with the really bloody butcher, Stalin, who for his own aggrandizement murdered millions of his own people as well as the thousand of Polish officers and, basically, anyone who stood in the way of his plans.
Dear Nicholas II never wanted to be Tsar. He never asked for power. He did not want to rule and took his place because he felt it was his duty. What came after him? Greedy, selfish, envious power-seeking Lenin and Stalin...
At the signing of the Treaty of Brest-Litovsk, Nicholas - then in captivity - said, "And they call me a traitor!"
Seeing Churchill, Roosavelt and Stalin, you have to think, "And they call him 'Bloody' Nicholas"????
Posted by Christina at 00:25