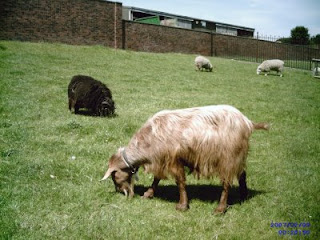 From a lecture 'way back when', I think it was Piaget who drew attention to the endearing ego-centricity of small children (along the lines of asking a little a girl if she had a brother. She said, "Yes." He asked, "Does your brother have a sister?" She said, "No." She wasn't part of someone else's life - her brother was part of hers. She was the centre of her own universe). It's very lovely in a child, and it often seems that humanity goes through the same stages.

A few hundred years ago, ego-centric 'earthlings' believed we were the centre of the universe and the sun revolved around us. So terrifying was the realization that we were not, that those who spoke the Truth lived in fear of their lives (and eternal salvation!). But, happily, we moved on and grew up a bit.

The other day, I had a conversation about vegetarianism with someone who said, "But what other purpose do animals serve? God put them here to feed us." Having just returned from stroking the lovely goat (in the photo), that seemed to me a startling thing to say! What purpose do animals serve? The same purpose as humanity, surely! Sentient beings who care for their young, who feel pain, who feel trust, who often care for their elderly far more than humans do, and who deeply enhance our lives by the beauty of their presence...Do animals cause wars? Have corrupt Parliaments? Follow fashion? Listen to hype? No, of course they don't! They go beautifully about the business of being who they are. A gentle cow in a field, only becomes aggressive when protecting her young. A pig is content to be a beautiful pig. As expressions of the Divine, they appear far closer to the 'Plan' than humanity does. Yes, they squabble among themselves and there is the predator and the prey - there are so many gory battles going on every moment between the spider and the fly, the ant and the anteater, the lion and the wildebeest, but it's interesting how, in our great, wise, superior humanity, people choose for the most part to eat the most docile creatures - cows, sheep, lambs, pigs, fish, even little rabbits. Nowadays, there are so many alternatives that are far more beneficial health-wise, and far less cruel to sentient beings who seem to understand the earth and Nature far better than we do. Perhaps the reason that humanity is so often at odds with itself - wars, anger, corruption, cruelty, power-grabbing - has a lot to do with the turning of human bodies into an animal necropolis.

Kahlil Gibran wrote a beautiful line: "Make me, oh God, the prey of the lion, ere you make the rabbit my prey." How lovely!
Posted by Christina at 22:44