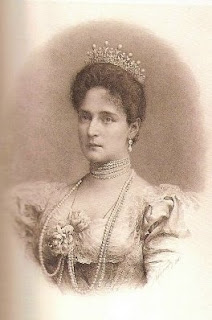 Alix of Hesse-and-by-Rhine is probably one of the most famous women in history and also probably one of the least known or understood. Just about everyone has heard of the tragedy of the Romanovs, and anyone who grew up in the 70s and 80s knows the Boney-M song, "Ra...Ra...Rasputin, lover of the Russian Queen...."

Rasputin appeared as a grotesque picture (taken from the cartoons of the day) as a photo-plate in the history books we studied for 'O-level' alongside the photos of the tragically murdered family and the brief line about the so-called 'weak' Tsar, some stuff about who won which battle, and 'a sickly son'. Then came the films about the survival of one of the Tsar's daughters, Anastasia - from Ingrid Bergman to Disney, and various TV productions in between. It's all so haunting and all so little understood, and I do not claim for one second to understand the reality of how it was to have been Alix of Hesse-and-by-Rhine - Tsaritsa, Empress of all the Russias, mother of a nation and of a haemophiliac son, wife of the the most powerful and yet the most genuine ruler of Europe - but when you find yourself immersed in this family, it becomes so clear that nothing is anything like the way it is presented in history books!

These are just my views and I am totally open to receiving criticism and disagreement and lay no claim to understanding it all. Alix was a beautifully happy child, known as 'Sunny' for her brightness. She was well-educated, brilliantly intelligent, beautiful in appearance, and deeply spiritual. She also, like so many members of her family, seemed to have the trait - as seems to happen a lot with those who go deeply into their inner life - of a sense of darkness and fear. Her close friend and cousin, Marie Louise,mentions this and writes of her sense of foreboding, and it is clear that Alix took nothing at face value, was never superficial but was absolutely true to herself, to those she loved and to her sense of duty. What is much misunderstood, to my mind, is the idea that she somehow was desperate to cling to power. Alix would surely have been so much happier had she and Nicky (Tsar Nicholas II) been able to simply steal away and follow their own Lights. Everything...absolutely everything she did as Tsarina, was done from a sense of duty and the belief that, having accepted that role, she must live by it. It's simply beyond the comprehension of most people (myself included!), how difficult it must have been to have had to appear in public as some kind of leading light in the social superficiality, while knowing the son, whom you love so deeply, is suffering an agonising and life-threatening episode of his illness. It is difficult enough for the average spiritual seeker to spend time in a small social world, and that must be magnified hundreds of times in Alix' situation.

There have been countless armchair psychologists dissecting this woman and I don't want to add to that. She has been vilified and adored. She has been maligned and sanctified. It would be lovely simply to respect her and allow her the privacy that she so sought. No more digging up bones. No more nasty arguments about who was right and who was wrong. Simply, on the birthday of this beautiful, loyal Empress who deeply loved her husband, her children, her adopted country and who lived through such tumultuous times...Happy Birthday, dear Alix!
Posted by Christina at 23:47