Saints and Suffering - an oxymoron! 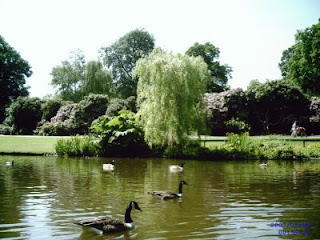 As a child, I loved reading the lives of the saints. They intrigued, inspired and utterly fascinated and absorbed me but something always bothered me: so many of them suffered from horrendous and grotesque illnesses. Those who weren't mauled by lions for the entertainment of the Roman mob, or hanged,drawn and quartered, or cannibalized or crucified upside down, or flayed alive or beheaded, often developed mysterious growths, tuberculosis and consumption and a large percentage of them died at a young age. Of course, the books and the images - young men pierced by arrows or saintly virgins holding their eyes (or even their breasts!) on a platter to show the means of martyrdom! - were quick to point out, that these saintly people were so holy because they participated in the suffering of Christ.

It's a heady concoction for a child. To go several times a week into a church and see the crucified Jesus with nails protruding from his hands, his body writhing in agony, and then to be told, "This is because you are a sinner and God loves you so much!" To hear that 'He gives His crown of thorns to his friends" creates the weirdest notions of Love and of who or what God is. This loving Father, whom we were to worship, somehow can only be appeased by suffering? This God who is omnipotent, somehow requires His children to endure all kinds of agony in order to be cleansed? When my mother wanted me to be cleansed, she put me in a bath and quoted poetry to me, then hugged me dry in a towel. But the Supreme Parent saw His (there was never any Her in it) children as needing cleansing by feeling such guilt that they could only assuage it by tremendous physical suffering.

Good grief! What an utterly nasty and unnecessary concoction that was! Look what it did: the child abuse scandals coming from various parts of the world, instigated by those in positions of religious authority! The burning and murder of many men and women as witches. The burning of heretics. The massacre of Jewish people not only by Hitler's holocaust, but by other so-called Christian nations - even here in the north of England (with a timely excuse for a scapegoat that 'the Jews killed Christ' while quite forgetting that Jesus was Jewish! The centuries of religious feuding and wars. And not one single word of it comes from the mouth of any of the truly spiritual founders of any of the most prominent religions. Had suffering been something required, would Jesus, for example, have cured so many people? Of course not, he would have patted them on the head and said, "Your suffering is good and holy!"

To this day, all the time, I hear 'religious' people saying, "Those who suffer are close to God.." and so many well-meaning people resign themselves to the will of a tyrannical God and think that is good, while others pander to the illness and think it is a sign of sanctity. Well, I utterly refute it! God is synonymous with Life. Does Life ever think it needs to destroy itself? It wouldn't make sense. The saints who suffered and died young, did so because they believed it was holy to do that. They brought their own illnesses on themselves by the belief that it was what God wanted. To my mind Life is Life. Life is the freedom to express our gifts fully, without any need to appease a stroppy Deity. That Life, the Life that lives through us, that expresses so purely and beautifully in Nature, in the love between people, in all that is healthy and pure and whole is what we call God. Surely, this whole notion of God was born of a series of minds that had so many issues of their own about guilt, and somehow they infiltrated the whole religious world and led people to suffer or inflict suffering on others through some totally bizarre notion that that is pleasing to this idol, who bears no resemblance whatsoever to the Buddha's vision or to Jesus' vision or Mohammed's vision, or to the vision of the great Sikh, Hindu or Judaic visionaries.

There is nothing holy or 'whole' in suffering. It is surely not the Divine view at all. Well...I watch the ducks on the lake at Temple Newsam and this is how it seems to me...
Posted by Christina at 23:34