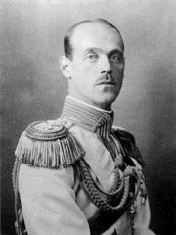 This week I was blessed to hold in my hands original letters, postcards and photographs from the Tsar's younger brother, Grand Duke Mikhail Alexandrovich ('Misha') of Russia, and the sense of the man that came from being among his things was so lovely.
It often seems that the 'also-rans' of history - the bit part players who are so often behind the scenes - have stories to tell which are at least as remarkable as those who stand centre-stage.
As with the major players, history so often writes off these people in one or two superficial sentences, as though anyone's life can be narrowed down to a footnote in history.
Misha has been various described as the person who most wounded his brother by his betrayal (by marrying in secret without the consent of the Tsar) or as a romantic whose views were or little consequence but whose father - Alexander III - thought him of better Tsar-material than his elder brother, Nicholas. Again, it's so glib and so easy to pass these fleeting judgements on people of the past.
To my mind - and this became even clearer among his personal possessions - Misha was a romantic soul in a beautiful physique, with such handsome features, and with a very brave heart. Like many younger sons, he was seeking a purpose and was basically hanging around like an understudy in a play on the off-chance that someday he might be called into the main role. Having neither the ambition for power not the self-seeking mentality that compels some people to plot and intrigue, he simply followed his heart. No one with a thinking mind could spend his/her life living out some second-hand role, and though Misha did - briefly - appear to betray his brother, by marrying the 'commoner' Natasha, he was a truly noble soul with such a deep love for his country and his family.
Sadly, I think, he was 'hooked' by a woman who used him for her own ambition; who constantly slandered his family and who was downright cruel to him in some of her letters.
Where Misha really came into his own was during the war when, permitted to return to Russia, he proved himself not only a kind and brave leader of one of the most eclectic regiments in the Russian army, but also as someone who could read the signs of the times.
While much has been - rightly to my mind - made of the discovery of the missing bodies of the Imperial Family, it is so tragic that Misha's last resting place remains a mystery. Somewhere in some deep, dark archive, his murderers' accounts of his end must be stored. Perhaps one day, even though his physical remains are probably nothing more than dust now, it will be possible to place a memorial at the site of this lovely man's murder.
Posted by Christina at 22:40