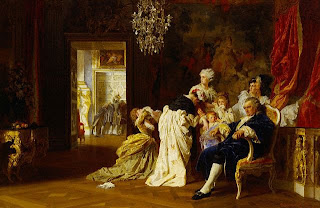 I read a Primary School article today about the French Revolution. It said more or less that Louis XVI was tyrant who incarcerated anyone who disagreed with him in the Bastille; and Marie Antoinette was a heartless woman who said, when people were starving, "Let them eat cake." The revolutionaries, on the other hand, according to this article for children, wanted people to be free and to be fed and cared for.

Of course, being an article for children, it didn't say that Robespierre was utterly paranoid and a megalomaniac who was so tyrannical he even knew what 'happiness' meant for everyone, and no one else's idea of happiness was valid. It didn't mention, being an article for children, that The Terror led to the bloody mass slaughter of countless innocent people (rich and poor) or that some of the revolutionaries were so intoxicated by their own power that they thought they were suddenly kings...and, in the case of Robespierre, that vile, vile man, ended up going to the guillotine with half a face (the other half having been shot away by the same rabble that he had created).

Nor did it mention - which would have been more accurate - that Louis XVI was a man who ardently loved his country; a man who would had no desire for power but would have been far happier among his clocks and clockwork mechanisms; a family man (like Nicholas II) and nothing like the tyrants who came afterwards. Nor did it mention that Marie Antoinette was first officially married to him when she was still an infant; was actually married to him when she was still a child, was sent from her home to a foreign place and was stripped of her clothes on the border in order to symbolise that passing and was then at so tender an age thrown into a completely different world with a husband she didn't know. It didn't mention the way in which she, like Alexandra of Russia, suddenly was treated as an enemy simply because of where she was born, nor how, later, she might have escaped from France but chose to stand by her husband...There is so much more to say of them both...

Thank you very much, Matterhorn :-)