Did They Have to Beatify Karl? 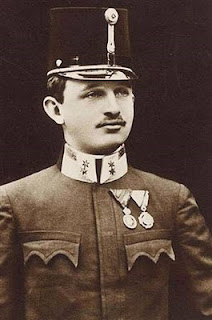 I think it is rather unfortunate that the Catholic Church decided to beatify Karl, the last Emperor of Austria-Hungary, not because I do not admire this man, but because as soon as someone is turned into a saint (or on the way to becoming a saint) it always seems that their true personality and humanity is lost in the mirage of 'sanctity'. They seem to lose their immediate appeal as fellow human beings as they are placed on some kind of holy pedestal (and deemed 'worthy of imitation' - though how it is possible for the average person to imitate an Emperor of Austria is rather unclear).

Perhaps that kind of unexpected elevation is rather appropriate in Karl's case. When he was born in 1887, the likelihood of his coming to the throne was minimal. Crown Prince Rudolf was still alive (just about!) and several others stood between Karl and his great uncle, the aging Emperor Franz Josef. Even after Rudolf's tragic death at Mayerling, others stood between young Karl and the throne, most notably, Archduke Franz Ferdinand, whose murder not only raised Karl to the position of heir, but sparked the First World War.

I admire Karl for several reasons but primary because he was the sole member of the family to take the trouble to be present when the bodies of Franz Ferdinand and his wife, Sophie, were brought back to Vienna after their murder in Sarajevo. The vile minister, Monenuovo, who hated Franz Ferdinand, had arranged that their bodies should arrive in the middle of the night to avoid a public display of respect for the murdered archduke, but Karl was there. I think of him on that dreary platform, paying his genuine respects to the dead and grieving for Franz Ferdinand and Sophie's children. Karl also promised to take care of those children.

When, in the middle of the First World War, he became Emperor, he was seen by the war cabinet as a liability. He objected to the use of poison gas, the killing of civilians and he sought to make a separate peace. This, of course, is seen as treacherous in war time, but Karl, unlike many of those war-mongering ministers, had seen the slaughter first hand and - along with so many other ordinary soldiers - saw the pointlessness of it all.

He was a devoutly religious man, and his religion undoubtedly was an essential part of him, but I think that making him a saint is really the last thing this unassuming man would have wanted. It smacks of some kind of political motive to me and I hope that this very real human being, caught up in the trauma and tragedy of World War One, isn't turned into some kind of plaster-cast caricature of the interesting and well-meaning person that he was.
Posted by Christina at 22:54