The Kaiser in the First World War 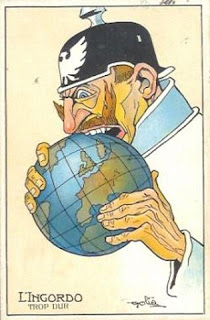 Throughout the First World War Kaiser Wilhelm seemed to go into a sort of manic-depressive state. One minute he was elated and filled with wild notions ranging from rage and anger (about killing all the Russian prisoners of war) and the next taking to his bed for in utter despair. If 'Willy' were responsible for the war, as was suggested afterwards by those who wanted to bring him to trial for war crimes, he would be a real criminal, but the truth is that he wasn't responsible for it at all. He was a puppet. He called himself the All Powerful, and he played in his uniforms and parades but his generals and war council played him to the full.

I wonder sometimes which would be worse for Willy: to feel himself responsible for all that carnage, which he did not want, or to view himself as insignificant and at the mercy of his ministers. The propaganda of the time portrayed him as a monster but he never actually commanded an army or captained a ship. He played - Nero-like, he fiddled while Rome burned. Poor, poor man - he was just a little boy playing and never realising that those around him were taking his game as reality.

The photos of him during his exile in Holland, show the face of a man filled with sorrow. I guess, for appearance sake, he played his part to the end - his memoirs are filled with untruths (such as what he wrote of Tsar Nicholas in the run-up to the war) - but in his heart, he must have been feeling bewildered beyond belief. He might have liked to have been the monster on the propaganda posters, rather than the poor little boy and sad man he became.

Willy or Veelie or Willie, which ever way you wish to spell it :-)

You have done your homework well and apparently have accomplished much with your writings! Fascinating. I hope I can find the time to read your books.

This is Chuck Schoon, cschoon1213 from YouTube who put up the Jesus of Nazareth movie. Peace to You...... Chuck :-)

I love the 'Jesus of Nazareth' film - so beautiful and powerfully inspiring :-)