The most interesting and practical idea in medical or nurse training is, for me, the realisation that all interventions are an attempt to restore homeostasis – the body’s own ability to regulate itself. Medical practitioners attempt it with drugs or surgery and I often think that the less intervention, the better. The body is so remarkable in its ability to restore itself to balance. Homeostasis doesn’t mean everything is always the same, though. It implies growth and development – just as a baby becomes a child and then an adolescent and an adult. Humans are no different from the rest of nature in that respect. When an area is concreted over and apparently deprived of any living thing, it takes so small a time for weeds and plants to sprout through the gaps, and colour to appear as though the world naturally returns to its own equilibrium of growth, stasis, balance.

Like the beautiful song, “From a Distance”, the world looks quite different from the air where patterns are clear – oceans, conurbations, fields, countryside, cities usually clustered around rivers and the whole history of the area – its growth and the development of humanity – is so apparent. Geologists, I imagine, see the same patterns in the way rocks are formed – though I know zilch about geology!

Stepping back a little and looking at the patterns of history, it really seems as though there is a brilliant design of homeostasis built into it. Like those executive toys (Newton’s balls), 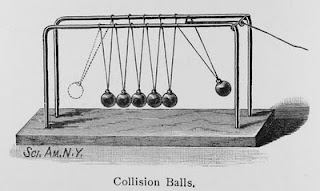 it swings this way then that way as ideas come to the fore, and every single time returns to a kind of balance again. Some people thought they ruled others and others thought they were oppressed, but from the larger perspective, it’s clear that everything was working together for the development of the whole. For an example in English history – the country is under Roman rule and there is strict Roman order....then the Romans are suddenly gone and it swings back to a wilder time (I think, in spite of our reputation for being so stiff upper-lipped and stifled, the English are quite Nature bound at heart – after all we are a maritime country and our history has been greatly influenced by the ebb and flow of tides!). There are whole centuries which appear to be quite dormant – nothing significant happening at all – then suddenly a flurry of activity for a century or two....then dormant again. By the time of the Tudors, opposing religious opinions had swung to extremes. First the Protestants killed the Catholics, then the Catholics killed the Protestants, then the Protestants killed the Catholics again...and then it settled on a new level of tolerance – a homeostasis. In the 18th Century, the monarchs were viewed as debauched and the fashionable society of the time seemed to revel in petty intrigues (basically, who was having an affair with whom), and by the 19th century we had gone to the opposite extreme of what is viewed as Victorian prudery (Queen Victoria, however, was anything but a prude). It was the balancing out of what had gone before. In the 20th Century, there was the sabre-rattling of militarism which led to the slaughter of the world wars, followed almost immediately by the opposite extreme of the ‘make love not war’ slogans of the 1960s. In the 1970s, as I personally recall it, there was a whole dreary move of socialism, followed by the extreme Thatcherism of the 1980s. At the same time, pop music of the 1970s was filled with glitz, whereas in the 80s it was far more intense – achieving a balance between the popular culture and the political culture of the time.

Of course, it’s impossible to write of so many things in so short a post but my whole point is that I think that no matter how powerful leaders think they are or how aggrieved or victimised others might feel, it is all part of a glorious unfolding of humanity, which always, just like an individual body, finds homeostasis. A much greater hand is at work here and no matter how many people like to tell us that the future is bleak or we are under threat from all kinds of dangers, the grand design is so beautiful and it is a great thing to be a part of it all! On a personal level, I believe each of us has the power to create our own history, our own lives and our own futures and in so doing we contribute to the beautiful work of art that is life! 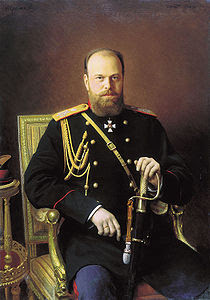 And, on the birthday of Grand Duchess Elizabeth of Russia, it is also the anniversary of the death of Tsar Alexander III who made his own contribution to life, not least by bringing into the world his very gifted, kind and much underestimated son, Nicholas II.
Posted by Christina at 23:25

My goodness, there seem to have been alot of royal anniversaries these past few days- the ones you mention, for November 1, the birthday of Marie-Antoinette on November 2, and today, November 3, the birthday of Leopold III of Belgium.