"In Flanders Fields the Poppies Blow....." 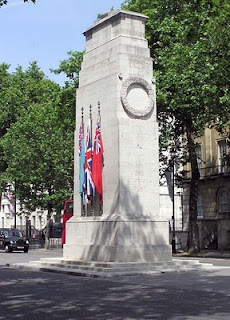 This morning, along with most of the rest of of the country in supermarkets, work places, at memorials and anywhere anyone happened to be, I stood for the 2 minutes silence of Remembrance Day. I thought of Max of Hesse-Kassel, Maurice of Battenberg (2 members of the same family killed on opposite sides of WW1), and I thought of my own great-uncle – an ordinary northern working man who went off to war to ‘do his bit’ and whose wife gassed herself when she heard of his death on the trenches, and another great uncle who had been married for only 3 days before he went off to die in some hell-hole battle....for what? I guess they thought it was noble and for freedom, just as the Austrians, the Germans, the Australians, the French, the Russians, the Americans and every other nation which took part in that war did).

Then I thought Agincourt, Afghanistan, Bosworth, Battle of Britain, Camp Hill, Cambrai, Culloden, D-Day, Edgehill, the Falklands, Gallipoli, Hastings, Helmand Province, Indian mutiny, Iraq, Jutland, Kings Norton, Korean War, Marston Moor, Mons, the Marne, Naseby, Passchendaele, Seacroft Moor, Towton, Worcester, Ypres....So many centuries of British battles...so much slaughter for what? So many people at home crying for their dead, so many soldiers believing they fought for what is right...but who now really remembers Towton (the bloodiest battle ever fought on English soil) or why they were dying at Hastings or Agincourt...or the Somme? Just pointlessly, endlessly pointless fights that achieve nothing.

90 years ago today, the Cenotaph was unveiled to honour those millions who had died in the First World War. The Unknown Soldier was laid to rest in Westminster Abbey and it must have seemed as though humanity had reached its glut on the carnage of war. After all, that was the ‘war to end wars’, and remembering it with poppies and due respect to the courage of all those who had died and demonstrated sometimes incredible bravery and other times, sheer terror, was surely meant to be the lesson that after centuries of inane killing, we realised that nothing was ever achieved by it. 90 years, an even longer world war, and numerous other wars later it continues. Now, the German fighters of WWII stand alongside their ‘enemies’ in Britain to honour the dead. Of all the thousands of wars and battles in history, only one, to my mind, makes any sense, and that is WWII – stopping Hitler’s bizarre view of the world, but it strikes me as mightily odd that Britain ostensibly went to war to protect Poland and yet, at the end of the war was happy to see Poland handed over to the totally insane Stalin.

If we stand in silent awe before cenotaphs, surely part of the awe is at our own inability to see how we can continue perfecting the arts of war with bigger and better weapons, and still not knowing really why anyone is still fighting.

Forgive me if this offends you on this day on which I, too, wore my poppy with pride. I honour every single one of those people who were brave enough to do all they did. I honour, too, the objectors - though that is so much less glamorous - and I honour those who were shot as deserters when they couldn't take any more of the horror of it. I just don’t know what it is, or what it was ever for.
Posted by Christina at 23:04