Some years ago someone whose opinion, spirituality and intelligence I trust said that there is a small group of people (eight families, I believe) who wish to control the world and this group of people have been working through various means to achieve that end for the past 150 years or more. It seemed so bizarre and contrary to all I had learned, lived by, my spirituality and my world-view that I couldn’t make sense of it and so, without disputing it, I simply decided to watch from an impartial standpoint and see what I saw. Since then, I have discovered and seen many things. I have read the biographies of people who, with amazing courage and great honesty, wrote of how they were hired by various government agencies to incite revolutions (notably in South America in the 1980s) in order to pressurise the presidents or governments there into handing over their most arable land to fruit producing companies. I have read sermons from priests about their work among the poor of Africa and how the people have been deprived of their usual crops and compelled to buy seed from big companies who have genetically manipulated those seeds so that they do not naturally reproduce the following year. I have observed the way in which animals are appalling treated and how pharmaceutical companies introduce dangerous toxins into the food chain, then provide cures for the results and keep people on medication for their entire lives (at great profit to themselves). I have seen, too, how the American Constitution – that flagship of freedom!! - appears to be being deliberately dismantled and how the countries of Europe are being compelled to hand over their independence to a central body in Brussels and how just about everything I was taught about the history of the world since about 1789 was inaccurate or, to be honest, a lie.

To be frank, I am not a conspiracy theorist – not because I doubt that there are conspiracies but because I not really very interested in what politicians do or don’t do and who is right and who is wrong. Most of the time it seems a bit silly to me – little boys (and now girls) playing little power games. I would much rather walk in the woods, look at trees, ducks, flowers, goats, dogs, the sky and read poetry, listen to music and commune with nature; and I believe – or rather know with all my heart and soul – that there is a far greater and more beautiful power beyond all the childishness of power-seekers - but sometimes it just feels right to speak out.

In the light of recent events, England must appear as a very sorry place to

be: a place of mindless violence, unrest, riots and discord. Firstly, these events took place in relatively small areas of the country. Secondly, is it really possible that this violence erupted spontaneously and on such a scale from people who – let’s be honest – appear to be so easily led by a mass mentality and not to be able to think for themselves. Something or someone co-ordinated it. Thirdly, what is the significance and relation to this of the recent Bilderberg meetings? Is there a connection or not? Why is Bilderberg so secret? Why are we suddenly intervening in Libya? Why are we in Afghanistan? Why is someone creating a constant climate of fear? Why are people like Peter Mandelson (one time member of the Young Communist League) living in luxury and appearing at Bilderberg meetings, created as Peers of the Realm? Why is Tony Blair, who lied to Parliament about Iraq’s supposed W.M.D.s making a fortune from oil-producing countries now? Why was President Obama awarded the Nobel Peace Prize simply for being elected president? We have let things go on unchecked for too long and now, this past week's chaos appears like the oubreak of a fever that signifies the bringing to a head of an illness that is being cured.

Happily, something really wonderful is coming out of all of this mayhem. If you want to destroy a nation – as Russia was destroyed in 1917 and Germany a year later, and as many S. American countries were destroyed in the 1980s – first you must create chaos. The South American countries, re-invented themselves. Now, they seem like the safest places on earth. The recent chaos in England has brought out the true English and wonderfully multi-cultural character! Far from creating a climate of fear, these events have created an amazing awareness of who we really are! I have yet to see a more dignified response to something so horrific, as the response of 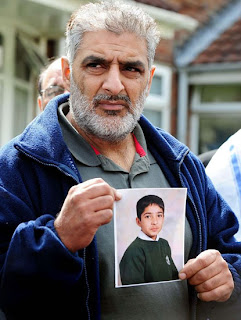 Mr. Tariq Jahan to the murder of his son. This Moslem gentleman, to whom all our hearts and love go out, spoke so powerfully as he called for peace and of his faith. Then there were the Sikhs who silently stood outside their Temple to prevent any attack. They did not want violence. They simple stood there to protect what was sacred to them. The brilliantly outspoken Christian Archbishop of York, John Sentamu,

who cut up his clerical collar and refuses to wear it again until there is freedom in Zimbabwe, and who has done so much for the local community, appeared on the BBC saying that if attackers approached his door, he would defend his family and his home with a cricket bat if necessary. And hundreds of ordinary English people appeared on the streets not to act as vigilantes but to protect their own communities and clear up the mess left by the riots. This is England. Immediately we all step into the ‘spirit of the blitz’ and this normally reserved nation suddenly remembers that we are proud of our communities and our tolerance and way of life. It might take a riot or two to remind us who we are but, after years of socialist propaganda and the attempts to create fear, we are still a nation of eccentrics and communities; a tolerant nation and a nation of individuals.

It seems to me that these recent events have achieved the very opposite effect than was planned. Now, perhaps, they will attempt to police the internet in the name of protecting us, but really it won’t work. There is a power far greater than any material, financial or political machine, and it simply cannot be eradicated. That is the power that lives within all of us -the beauty and divinity and sacredness of humanity and the soul that cannot be crushed.
Posted by Christina at 23:44

Christina, thank you for the kind words about the United States. (I also meant to thank you for your Fourth of July wishes, but I never got around to it!). You're right- federalism and the separation of powers are no longer respected. I found an interesting article on the gradual transformation of American politics over the last century, which I can send you if you like.

I am also currently reading THE LIFE AND TIMES OF FREDERICK DOUGLASS, the famous African American abolitionist. The book can be downloaded from Google here:

It is very insightful in describing the moral, spiritual, social and political effects of slavery on the United States and the yearnings of the human soul for freedom. Issues which are still so relevant in our times.

Thank you very much, Matterhorn. I would very much like to read the article that you mentioned. The brilliance and foresight of the Founding Fathers of America is so wonderful and the details of the constitution so carefully designed to ensure freedom in so many ways. Although the history of England and development of our constitution and methods of government are quite different, that of America has always been the envy of the world - 'the Land of the Free' and the place to which anyone could go and raise themselves by their own effort and imagination. It is too sad to consider that these freedoms are being eroded. It sometimes seems, from this distance, that this dates back to 1013 and the establishing of the Federal Reserve...but, as I am not American, I might be mistaken.

People have different views of how this erosion started, but the article I sent you traces it back to a new theory of man and the state, which developed in the Progressive era (so yes, around the time you mentioned).

Another worrying trend is that some, reacting against federal overreach and so on, seem to become so libertarian, that they are almost anarchist.

Thank you very much for the article, Matterhorn. I am looking forward to reading and absorbing it!