"...This faculty of enjoying beauty as a whole and in detail has followed me all through life. Line, colour, form, and the sounds and scents belonging to each picture, have made life extraordinarily rich, and with every one of those unforgettable impressions comes always that feeling of gratitude for each new beauty revealed to my soul. 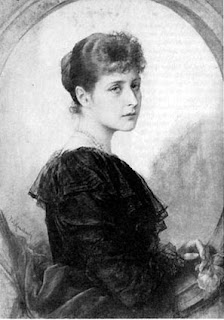 Today I still feel grateful to beloved Queen Alexandra for the vision of beauty she was to me...This other beautiful woman had a tragic and terrible fate. She was the Grand Duchess Elisabeth of Russia, my cousin, sister of the late Czarina. She had married one of my mother's younger brothers, the Grand Duke Serge. He was blown up by Nihilists, long, long before the revolution, whilst governor of Moscow. She then entered holy orders, building a convent in which she lived; but her holy life brought her no mercy from the Bolsheviks. She was abominably slaughtered in Siberia, but, curiously enough, her body was found and later on transported to Jerusalem, where it now lies in the Holy Land.
She was quite newly married when her beauty burst upon me as a marvellous revelation. Her loveliness was of what used to be called the "angelic" kind. Her eyes, her lips, her smile, her hands, the way she looked at you, the way she talked, the way she moved, all was exquisite beyond words; it almost brought tears to your eyes."
Posted by Christina at 12:44

Queen Marie of Romania certainly lived in an era of many beautiful women (eg. Queen Alexandra, Ella, Alix of Russia, Victoria Eugenie, the Empress Elisabeth of Austria, etc). Although she was one of the most beautiful princess at that time, she was always quick to admire the beauty of other people. I am quite amaze that she had a deep, and almost worship-like admiration for her cousin Ella.

Thank you for commenting, Gem. I agree - Marie of Roumania was well aware of her own charms but was equally quick to notice them in others. She was quite willing, too, to write her honest opinion (she had a very low opinion of Charlotte of Prussia!) so her appreciation of Ella makes this all the more touching.