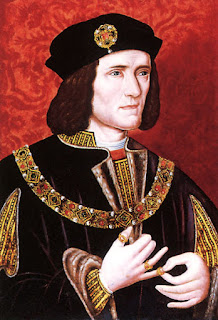 A rather unusual exchange took place yesterday in the House of Commons when an MP for Leicester and one for Yorkshire briefly debated where the remains of Richard III – presumed to have been recently discovered under a car park in Leicestershire – should be buried. The MP for Leicester pointed out that Richard has been his county for so long that he should remain there, while the Yorkshire MP believed that the Yorkist leader should be returned to York or its surroundings. The debate was unfortunately cut short when a third MP objected that it was beginning to bear resemblance to the debates between ancient cathedrals about where the relics of saints should be kept!


As an inhabitant of Yorkshire, I absolutely believe that here is where Richard belongs. He loved this county and was – and always has been – loved and respected in York. Far from being seen as the eponymous villain in Shakespeare’s play, he is remembered for the benefits he brought to the country and particular to the north of England. His Council of the North was one of the first to pay real attention to the wishes and requirements of northerners (who, alas, are still often viewed by some in the south as rather backward and uncultured!). Richard arranged for government business and law courts to be conducted in English; he established the Court of Requests to grant a fair hearing to those who could not afford a lawyer to defend them; and he was also a loving husband and father. Many believe that the recent premature deaths of his son and his wife led him to take such a reckless stand in the Battle of Bosworth, where, of course, he was killed by Henry the Usurper...and thus began the reign of the very nasty Tudors!


To quote a song from Les Miserables....‘Bring him home’! If these are proved to be Richard’s remains, he surely belongs in Yorkshire!
Posted by Christina at 19:25