The beauty of the BBC’s Lark Rise to Candleford was so unique that the creators must have faced quite a challenge in deciding on a new project, knowing there was so much to live up to. 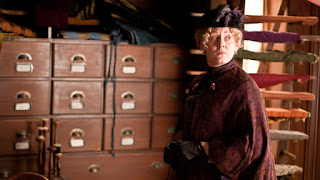 At first it seemed impossible that anything could equal Lark Rise but, three episodes into the brilliant Bill Gallagher’s new series The Paradise, it’s clear that the writer is using the same successful formula in creating something very beautiful!


Loosely based on a novel by Zola, The Paradise is set in a department store in the north of England in the late 19th century. As with Lark Rise, the producers’ attention to detail in the settings and costumes is superb, and while Lark Rise was an absolute delight for the wonderful pastoral and village scenes, The Paradise is exquisite for its portrayal of the luxury of beautiful gowns and other items on sale in the extravagantly grand setting of the cathedral-like shop. The acting is convincing and the characters so well-cast, and I am now convinced that the excellent Sarah Lancashire is the new Maggie Smith (though considerably younger!)!


The real charm of both series, however, lies in the beauty of the characters and Bill Gallagher’s wonderful story-telling. When so much air time is taken up with dark and depressing crime and forensic programmes, it is beyond lovely to find a series in which there are genuine people with real-life problems but, without being twee, no one is truly evil and the viewer knows that nothing really nasty or degrading is about to happen. There are, of course, difficulties and misunderstandings in relationships as well as financial problems and other challenges that people meet every day, but – as happened in Lark Rise – each week’s story ends in kindness and the triumph of good. It is so refreshing and I am sure it is ‘good for the soul’ to find a series that is beautiful on every level – one that is both delightful to the senses and truly uplifting!
The Paradise


Thank you Mr Gallagher and thank you BBC for such beauty!
Posted by Christina at 09:41

Email ThisBlogThis!Share to TwitterShare to FacebookShare to Pinterest
Labels: Lark Rise to Candleford, The Paradise