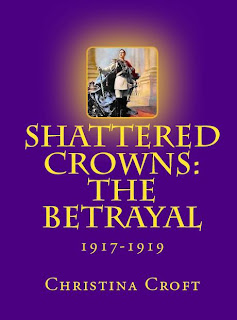 The final book of the Shattered Crowns trilogy: The Betrayal.

As the trilogy nears its conclusion, I am struck by the way in which empires fall. Ancient empires took decades to crumble and collapse but in 1917 and 1918, three major European powers were destroyed in a matter of days. There was something decidedly orchestrated about this and the same pattern played out in all three countries, resulting in the removal of the monarchies, the destruction of their economies and a shifting of their resources. Throughout my research it has become so clear that nothing, absolutely nothing, about the First World War was quite as it has been generally presented by the victors or even by the vanquished. I am struck, too, by the similarity with many modern day events which result in overseas wars, and I wonder if someone in the future will look back on this time and ask, "why did they really fight all these 'wars'? Who gained from them and how many people's trust was betrayed?"
Posted by Christina at 22:48