Step Two - Playing with your Puppy

Step 2 – "Spend time playing with your puppy to create a bond of trust."

The book recommends the simple game of ‘Fetch’, which sounds ever so easy. You throw a stick or a ball or some other toy and puppy loves collecting it and bringing it back to you. 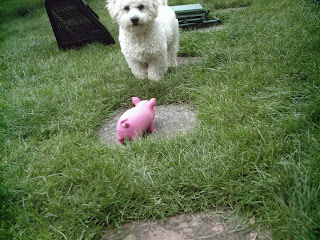 I throw the ball, rubber pig, small stick or chewy toy and Bertie looks at it and looks at me as though to say, “You threw it...you get it!” He obviously hasn’t grasped the purpose of the game so I follow the book’s instructions and attempt to teach him. I throw the toy and run after it and bring it back to the original place. Still he looks at me. I do this several times until I feel a little bit stupid running about throwing things to no purpose. I place the item in front of Bertie, put a treat on it and then throw it. He takes the treat and again I retrieve the object until I am too exhausted to play anymore.


Bertie then decides to play a proper game of his own choosing. This involves finding stones and chewing them. I try to prise the stones from his mouth and offer something less harmful and more tasty to replace it. He happily drops the stone, takes the treat and then returns to the stone, sometimes even parading it in front of me as though to say, “Look, I like this game.” Again I attempt to prise it from him but this time he runs away so quickly that I am concerned he will swallow it. 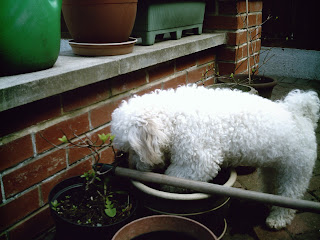 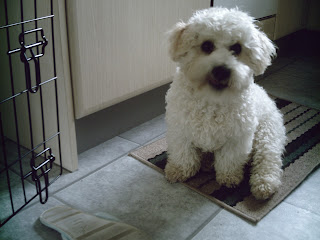 Ah ha! He needs something to get his teeth into that is not as dangerous as a stone. I give him a puppy dental chew. He wanders around the garden and finds an appropriate place to bury it...usually in a plant pot after digging up the plant...and returns to the stones. Eventually, much later in the day, he remembers he buried his chew and wants to go out to find it...He digs it up all covered in soil (as indeed is his mouth)and brings it to me to wash. I wash it and hand it back to him...and off he goes to bury it again in another plant pot (throwing out the plant in the process). He is developing more ingenious hiding places for the chews...they have been found now inside pillow cases, inside shoes and even in my dressing gown pocket (how on earth did he get it into there??) Oh, and speaking of shoes, a really great game is to take a shoe, run off with it and drop it into the pond...


Play ‘Fetch’?? Not a chance when there are chews to bury and shoes to steal...
Posted by Christina at 14:56