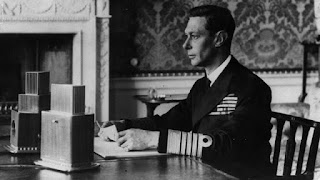 It is interesting the way in which propaganda can be used to destroy or to extol a character, and more interesting, perhaps, that in spite of years of being bombarded with slanted stories, so many people go on believing everything they are told by the press. Here is a very small example which struck me as almost amusing. Having seen the very interesting film, ‘The King’s Speech’ and having read more about the background and character of King George VI, it is clear that King George was a courageous man who had to face his own demons – largely those created during his childhood by his terrible bully of a father – to take up the role of King. George (or Albert, to be more precise) never wanted or expected to be saddled with the weight of kingship and his shyness and stammer made the prospect of having to take on such a responsibility all the more daunting. So great was his fear and reluctance to accept the throne that he reportedly sobbed to his mother, Queen Mary, when he realised what the future held for him on the abdication of his feckless brother. The fact that, in spite of his shyness, reserve and fear, he accepted the responsibility, is – quite rightly, in my opinion – generally portrayed as an example of his self-sacrifice, and the story of his weeping to his mother is used to show the extent of his courage in that he overcame his fears and did what he knew must be done.

The amusing part of this story is the fact that Nicholas II was equally reluctant to become Tsar and, in the emotionally-charged atmosphere surrounding the death of his father, he saw the daunting task ahead of him and wept to his cousin that he felt totally unsuited for such a role. His tears at that time are often cited as an example of his weakness, and his admission that he felt unsuited for the role is used to suggest that he was totally inept. Yet Nicholas, like George (Albert) overcame his own demons to do what he believed to be right...and even today he is villified for it.

Two men sharing the same dread of a daunting task but both accepting responsibility and overcoming their fears...one is hailed as courageous, the other as a weakling. Interesting, isn’t it? But then, as the saying goes, ‘history is written by the victors’.
Posted by Christina at 13:52