Ever in the Field of Human Conflict 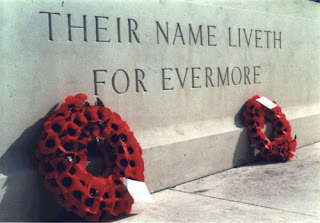 Now, as it is poppy time again, and already fireworks (in the pre-Bonfire Night days) are exploding all evening - reminiscent of the battlefields of the Somme - I was thinking of Churchill's much quoted lines and would like, without taking anything from the bravery of those RAF pilots of WW2, to turn it around.

Churchill said, "Never, in the field of human conflict, has so much been owed by so many to so few."

Looking back at the slaughter throughout history, it is apparent that ever, in the field of human conflict, so much has been given by so many for so few. The average soldier, and later the average conscript of the First World War, was misled by the lie that this was the war to end wars. So few people manufactured that idea, and yet millions marched off with some ideal that this massacre could bring peace on earth. Millions more suffered the loss of a father, brother, husband or friend. These men were just going about their lives, had no axe to grind with the Germans or Austrians or anyone else from another country. Nor did the average German conscript have any axe to grind with the British, French or Russians...Yet somewhere, a few people had a disagreement, felt a need to dominate, and invariably those people had a sense of their own inadequacy and a total inability to look inside themselves at their own problems and so played them out on the world stage at such a cost.

Hitler - poor little, weak fellow - found the means to attract to himself like-minded people because he appealed to the sense of weakness in a nation (a sense of weakness brought about, of course, by the terms of Versailles). Churchill was, I think, no less a megalomaniac - he just happened to be on the 'right' side, but would have done anything to ensure his own sense power - external to himself - to make up for the lack of self-esteem he felt in childhood. Ivan the Terrible - identical story. Alexander the Great - identical story. William the Conqueror, Richard the (so-called) Lionheart....The list is endless

And for the internal conflicts of these men - and such people throughout history - so much has been sacrificed by so many.

Okay, supposing I am wrong....well, here's a question. How come that the people in power, presumably those who are most intelligent, capable and aware, have again and again and again been unable to speak with one another to reach amicable conclusions. I have seen little schoolboys so angry with one another being brought to sit together and in five minutes they make an amicable agreement and become friends. Neither goes away feeling humiliated or having had to compromise their own beliefs. In five minutes, children can sit beside one another and become friends again. Yet some so called heroes of history couldn't do that?

Truly, ever in the history of human conflict, so much has been given by so many to ease the wounded child and ego of so few.
Posted by Christina at 23:39

Email ThisBlogThis!Share to TwitterShare to FacebookShare to Pinterest
Labels: Churchill, Hitler, Never in the History..., war