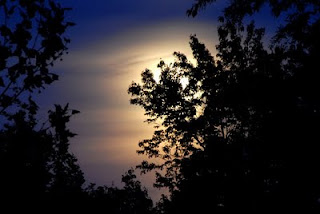 The night is so dark and misty - the perfect setting for the lead up to Hallowe'en, and what a set of bizarre reactions there are to that night! Here in England, I have heard from several quarters, a strange sort of backlash against this 'American import' this year. A few years ago, I heard a priest raging against it - calling it 'dangerous' like some kind of satanic ritual.

It's true that until maybe five or ten years ago, beyond the scary ghost stories and occasional pumpkin in a window, it seemed to have died out in England. There were no 'trick or treats' - instead there was (on November 4th) Mischief Night - which really meant stealing the wood from other people's bonfires before November 5th. Mischief Night escalated into putting treacle on door knobs, then throw eggs at windows or stealing someone's gates. People said how bad times were - forgetting that right back to the Middle Ages any excuse for disorder was welcomed! Trick or treat is mild in comparison and, personally, I think it's fabulous fun for children and a great American import Thank you, America!

The priest's reaction seems to go back to another era. The era when we didn't all live so indoors, hiding behind central heating and double glazing - when the dark night wasn't scary and the change of seasons was celebrated; when animals were brought indoors and there was no separation between humanity and the other creatures of the earth: the era, perhaps, before Christianity in its impurest sense arrived on these isles. The darkness of the night, the respect of the seasons was not something to be feared, but something to be respected. It spoke of the darkness within us - the fears, the judgements, the bitterness and the need to hide from ourselves. Samhain, like the May time Beltane, simply marked that contrast in Nature, that is reflected within us. It spoke of our fears as surely as springtime speaks of our hope. And here's an interesting thing: in the days and cultures where such things were acknowledged, respect for the wisdom of the elders was profound. Now, in our culture that fears the dark, we treat elderly people badly. We want only spring, only to be insulated from the natural flow of the seasons, and wonder why the world is as it is.

Hallowe'en - All Hallows Night - Hallowed (the same word that appears in The Lord's Prayer to describe God's Name) is not a nasty scary thing of ghouls and vampires and skeletons. It's no less a Feast Day than any other. Unless we face our fears, we are destined to be haunted by them, and it seems to me that our greatest fears are facing up to our own shadows - our own resentments, judgements, unforgiveness.

So...thank you again, America, for reviving our ancient tradition of remembering All Hallows Night - after all, if God/Life is omnipresent, everything is holy!


(Photograph courtesy of Andre Hilliard www.andrehilliard.com )
Posted by Christina at 23:36