Rudolf - What makes a tragic hero? 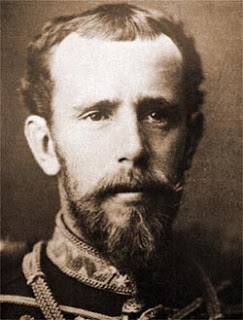 In the days of so-called 'reality' TV (which consists for the most part of minor celebrities airing their dirty linen in public or people grabbing their fifteen minutes of fame by being as outrageous as possible), it is beautiful to remember a more refined age when nothing was so rushed, so trashy, so 'throw away', and where people didn't make 15-minute idols out of people whose sole contribution to society was a desire to present themselves at their worst.

In all ages, however, people seem to have sought an escape from humdrum lives by looking at someone else whose life appeared to be more enchanted. Going right back to the foundations of drama, theatre and the modern cinema, Aristotle's idea of tragic heroes (which so inspired Shakespeare) still rings true. The tragic hero and protagonist had to be of noble (better yet, royal) birth and had to have a personal 'fatal flaw' that led to his downfall. Rudolf of Austria is such a man and if Hamlet were based on a real person, he might have been based on poor Rudolf.

Rudolf, Crown Prince of Austria -Hungary was born with a silver spoon in his mouth. His 'daddy is rich and his mama good-looking' - he was born into the age of Strauss waltzes, of radiant ballrooms where soldiers wore dashing informs and ladies wore entrancing ball gowns. He came from one of the most powerful countries in Europe, with a genealogy reaching back to the Holy Roman Empire. Gifted, handsome and with everything handed to him on a plate, the world seemed perfect for Rudolf....but he had Shakespeare's.Aristotle's 'fatal flaw.'

Nothing is ever as it seems and here is a different version of his story.

Rudolf was born of a mother who came from a life of freedom and adventure; a minor princess who had enough money to enjoy life without the responsibilities of power. She loved freedom, galloping apace on fast horses and wandering about barefoot. At a young age, caught up in the emotion of the moment, she married a handsome Emperor but had no idea that the Emperor's court was so confined by tiny rules that from that day forth she would be constantly in the public eye, and any infringement of those rules would be criticised. Like a butterfly caught in a net, she was confined and the only son of that marriage was a boy who seemed to share his mother's longing for freedom. Freedom to follow his own path; freedom to love and be and to live...But he was a Crown Prince, and as such had to fit that role. It tore him apart. He could hardly sigh in his sleep without someone reporting it and it absolutely destroyed him because he was forever in an act and never able to be himself.

His suicide at Mayerling is not a romantic story. By then, Rudolf was already destroyed - probably by syphilis and drugs, but more so by his own mind that had so yearned for freedom, as had his mothers.

Nowadays, when people display their dirty laundry on TV for their couple of minutes of fame, it's interesting to think of people like Rudolf who never sought that fame but were destroyed by it (along with the stifling atmosphere of the Austrian Court). Fame is not nearly as glamorous as some people believe.
Posted by Christina at 00:07