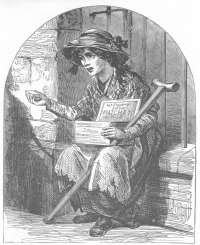 In Victorian times, small children were sent out into the street to sell flowers and matches and – according to Hans Christian Andersen’s lovely story – were told not to ‘come back until you have sold them all.’ It must have been a dire existence, standing on street corners in all weathers, searching for possible buyers and perhaps, sometimes, feeling driven to approach and even harass people into buying.

Nowadays, it’s all so much more civilised. Now, adults sit in Indian call centres and just phone around the world trying to sell something. Perhaps they have been told they must make their daily quotient of sales but it’s one thing to approach a person in the street and try to sell them a box of matches or some flowers, and another to constantly and repetitively approach someone in their own home.

Five or sometimes six times a week someone from a call centre in India phones, trying to sell a new mobile phone package. Originally, I listened to their sales talk (always the same – “Good evening, Madam. I am calling from (whatever company). How are you today? Do you have a mobile phone etc. etc.” ), then I began to interrupt and say I wasn’t interested, then I asked them to stop calling, and still they call, quite often when I am in the middle of something to do with my own work or some other business. So I developed a new plan and decided to adopt multiple personae in response.

When they asked, “How are you today?” I replied first, “Oh, I am so glad you asked! I have been so lonely and was longing for someone to call...” before rambling at length about a mythical dead rabbit.

The next time, when they asked if I had a mobile, I replied, “Yes indeed! It hangs over my cot. There are little trains on it...” and rambled at length about trains (obviously the callers do not understand the alternative meaning of a mobile and invariably hand me over to their supervisor). The next time, I pretended to be stuck up a chimney.

Next time, when they ask if I have a mobile, I shall simply begin reading to them from one of my novels – after all, they are wasting my time, why not waste theirs? I think it is a rude imposition that they call so frequently and wish there were a ‘spam’ button on the phone. I wonder who pays these people to do this, who sells them the phone number, and why they think it is alright to constantly call and try to prise personal information out of someone. Not long ago, such a call began very brightly then the caller asked how much I earn. “Mind your own business!”

Having said that, I cannot help thinking that the poor souls in the call centre are in the same position as the match sellers of old and if you called me and read this, please know that my response is not aimed at you, but aimed at the whole notion of it being alright to constantly phone people to try to sell them something they don’t want and haven’t asked for. If I want a new mobile, I will go to one of the many mobile phone shops (there are 5 within walking distance) and make enquiries there!
Posted by Christina at 23:09