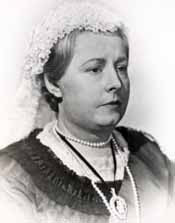 Thinking more of whether or not that wax cylinder is possibly a recording of Queen Victoria (please see the previous post), I was thinking of how wonderfully Irene Dunne portrayed Queen Victoria in the 1950s film: "The Mudlark". Her very slight German accent (the not-quite-rolled, almost guttural 'r's) seemed so perfect - though not at all like the voice on the wax cylinder.

Of all the films in which Queen Victoria has ever been portrayed "The Mudlark" - though clearly a fictional and beautiful story - really seemed to capture the Queen to perfection. It was made in the days when conversation was more important than action and the conversations between Disraeli and Queen Victoria, particularly capturing her stubbornness and stubborn refusal to cease mourning dear Prince Albert years after his death, were so spot on! I wish I had the entire script because it was so beautifully similar to Queen Victoria's own letters written after the Prince Consort's death. Still more impressive were the expressions on Irene Dunne's face - so like how I am sure Queen Victoria expressed herself. It also showed her romantic side and how, despite her stubbornness, she nearly always thought better of it and gave way in the end - just such a beautiful portrayal of her! It also includes some fabulous 'rainy-Sunday-afternoon-black-and-white-film' (you get the picture?) pathos and is a really feel good film. One example of the brilliant script is the line spoken by Disraeli:

Such proposals as slum clearance, public housing, educational facilities for the poor, are all wise and worthy measures and consequently will be opposed vigorously. The British are a proud and independent people, ma'am, and will not yield to improvement without a stout struggle.

There have been many presentations of Queen Victoria on the stage and screen and, alongside Dame Judy Dench's portrayal of her in 'Mrs. Brown' (more the facial expressions than the accent) I truly believe Irene Dunne comes closest. With or without the German the accent, this film is really beautiful and the settings (even to the incidental background pictures on the walls - the portrait of Bertie, the future Edward VII, in his sailor suit and Vicky and others) are spot on! I love that film!
Posted by Christina at 23:29