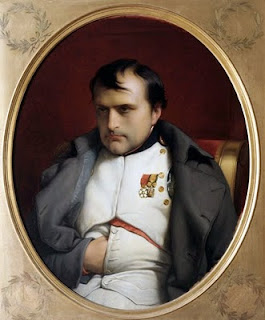 (Another interlude from the Queen’s granddaughters...)

Napoleon is ‘before my time’ as it were but I’ve been learning more about his life and found it rather sad at the end to see him fall and die as he did in exile. Although he was, in my opinion, a desperate little boy still having to overcome the bullies and humiliations of his childhood - and so became so obsessed with power over others to make up for the lack in himself, consequently leading to the death of 13 million soldiers across Europe – there is something attractive and inspiring about him. He was absolutely driven by ambition to the extent that when everything went wrong for him, he never stopped and complained, he simply did what he did and came back again! Exiled to Elba, for instance, after having been so successful a general and Emperor of France, he simply turned himself into Emperor of Elba (small island that it was) and did what he had done in France – made the place beautiful with trees and roads etc. etc. and when he had done all he could do there, he returned to France and by the sheer power of his personality and charisma, won the hearts of those who were sent to prevent his return. Unlike many revolutionaries, I think he had a heart – he genuinely loved Josephine – but, as with everything else in his life, he would not allow that heart, which could sometimes be so tender and he was not a cruel man, to stand in the way of his ambition.

Ultimately he fell...and that is the way of those who seize power, isn’t it? They all seem to spend their lives looking over their shoulders because they know that what they have done to others, others will do to them (Trotsky’s end...William the Conqueror, even, died alone and naked...Stalin left to die alone...). It surely comes from deriving power from others. It becomes like an insatiable hunger. Napoleon achieved greatness, but was never satisfied. He had to go on and on and on, even when he knew it was hopeless, trying to fill the need to feel secure, although such a need was insatiable since he sought that security from others and was never able to find it in himself. 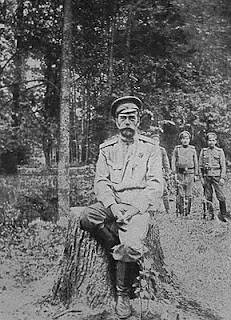 At the opposite end of the spectrum, is Nicholas II. A man who never wanted power but had it thrust upon him and, while working just as hard as Napoleon did to maintain an Empire, dreamed always of a simple life with his wife and family. Napoleon was prepared to sacrifice Josephine, the love of his life, in order to continue his dynasty. Nicholas, a man who was secure in himself and did not need power from others, was prepared to sacrifice everything for the love of his wife and family.

Who was the greater leader and who was better off in the end? A man who achieved so much and is seen always as a hero...and who died alone and sad seeing his life’s work taken from him, or a man who is always seen as weak but who ended his life secure in his own faith, surrounded by his family and with a clear conscience? Napoleon ended his life writing his memoirs and reliving his former glories. Nicholas’ life was cut short by murderers before he had the chance to do that but I doubt he would have felt any need to justify himself anyway. I really believe that these lines from ‘King Lear’ (ah! the joy of two passions intertwined – Shakespeare and the Romanovs in one post!) could have been written for what Nicholas said to his wife when they were in captivity...

Come, let's away to prison:
We two alone will sing like birds i' the cage...
...so we'll live,
And pray, and sing, and tell old tales, and laugh
At gilded butterflies, and hear poor rogues
Talk of court news; and we'll talk with them too,
Who loses and who wins; who's in, who's out;
And take upon us the mystery of things,
As if we were God's spies: and we'll wear out,
In a walled prison, packs and sects of great ones,
That ebb and flow by the moon

It’s all so endlessly fascinating!!
Posted by Christina at 23:11