The Age of Innocence 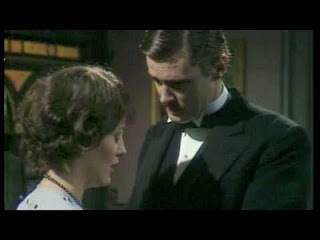 Along with many people, I was disappointed by the remake of “Upstairs Downstairs”, which was shown over 3 nights this week. The original series played so prominent a role in my adolescence, when ‘James Bellamy’ was the caddish hero who so perfectly epitomised every schoolgirl’s dream! During a Latin lesson in school, a friend passed me a note to say Simon Williams, the actor who played James Bellamy, was coming in person to open a shop in Leeds that night - “Oh, be still my beating heart!” – I still have the photograph of that evening when Simon Williams put his arm around our shoulders and smiled for the camera!

There was a beautiful innocence about that time, and in so many ways the original series recaptured the innocence of the world before 1918. The final series – set in the 1920s – was a sort of aftermath. There was grief, loss, frittering away meaningless hours in trying to capture a lost innocence, the Wall Street Crash, the loss of the Bellamys’ home, and James’ suicide, which was symbolic of so much that had been lost.

The new series lacked so much because it seemed to try so hard. Suddenly it seemed so modern in that it was trying to be so politically correct that it involved the token northerner, the person with Down’s syndrome, the Asian person, the German Jewish person....and tried, in so short a time, to include historical details (the rise of Fascism, the Abdication Crisis etc.)...but it tried too hard and it was not possible to empathise with the characters.

But I think (at least for me) there was something more poignant about the impossibility of making this series, set in the less aesthetically beautiful 1930s, as captivating as the original. The beauty of the original series was its recapturing of an era which is rather like our individual nostalgia for a childhood which might not, to all outward appearances, have been idyllic, but in which to the individual who remembers childhood, there were moments of sheer awe, excitement, the belief in magic, in fairies, in dreams! The pre-1914 world was, I think, a world of innocence. It’s true that it was a world filled with injustice and yet we cannot view it clearly through 21st century eyes without first returning to the way in which it was viewed from the inside. 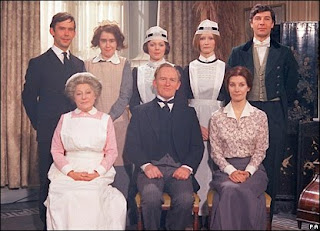 In the original ‘Upstairs Downstairs’, the servants were so proud to be working for an aristocratic family and they, far more than the family upstairs had such a hierarchy that was so stringent and well-defined. Under-housemaids peeped with delight over banisters to see the rich ladies in their beautiful gowns going out to a ball; butlers and footmen expected their masters to remain somewhat aloof and it was as though everyone had something to which to aspire, which was better than their own present circumstances.

People who have been in the presence of Queen Elizabeth II often speak of their sense of awe. Republicans become tongue-tied; and young, rebellious performers are suddenly so conventional when they meet her. That is the mystique of royalty. To those of us who are not royal, the very presence of a Queen, King, Prince or Princess, takes us right back to our childhood innocence and dreams and sense of wonder. The pre-1914 world was filled with such people and created fairy-tale-like occasions of pageants, processions, jubilees, coronations and royal funerals. The royalties might have lived in grand style but they created so beautiful an image and inspired such aspirations! If all their fortunes were added together and shared among the masses, each person might have gained a couple of pennies. The end of innocence came, I think, with the rise of envy. Rather than aspiring to be all that each person can be, unhappy people – led into wars by unhappy ad envious ministers and not by kings - looked at those whom they perceived as better off, and destroyed them. The murder of Tsars, Kings, the overthrow of dynasties gained nothing, but deprived us of so much appreciation, respect, awe and that child-like innocence, which we try to recapture in period dramas.

The world of ‘Upstairs Downstairs’, really ended in 1914-1918. I think it was a well-meaning mistake to try to revive it in another era, in which it didn’t really fit at all.
Posted by Christina at 23:28

Oh, what a wonderful post! I completely agree about the envy and spite etc., and also about the sense of wonder that a monarchical regime makes possible.

Thank you, Matterhorn. Here's to a wonderful 2011 filled with loveliness and the resurgence of true beauty! Though it's a little early, may I wish you a Happy New Year!