Getting out of the car at a supermarket today, I saw, very close to my foot, a perfect ‘shell’ of a squirrel. He lay on his side, quite dead, in a place where, until a couple of days ago, there had been a mound of snow. He looked like a young squirrel – not our original native red squirrels which are so rarely seen nowadays, but a grey one (an American variety!) with unusually white fur across his chest. 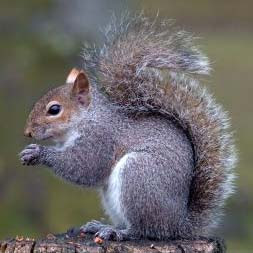 I felt sad to think perhaps he had frozen to death in that mound of snow, for there was nothing about him that suggested he had been attacked and he looked very young. I walk often in the woods and see countless lively squirrels but have never ever seen a dead one, so it seemed odd that this little one should be lying there like litter in the supermarket car park. The most striking thing, though, was – and please forgive me if this sounds macabre – that shell-like look that all bodies have when Life has moved on from them. I was a nurse for a while and, being around the ‘dying’ (I write it in inverted commas because ‘dying’ sounds so final and that, I am sure, is not so) there was always such a noticeable time when a hush fell over the ward, and such a sense of awe at the moment when someone seemed to move out of their body and all that was left was a shell.

This is the anniversary of Queen Victoria’s ‘dreadful 14th’ – the day on which her husband, Prince Albert and, seventeen years later, her daughter, Princess Alice, left this life. One snowy night, around this time of year, when carols were playing on a hospital ward, I held the hand of someone else, who will probably not be remembered by anyone since this person was neither a prince nor a princess and had no family as far as we knew, as they passed on. I hardly knew this person except in their most intimate moment of death. It was late on a dark December evening, just before Christmas. The ‘patient’ had been moved to a side room, the ward was quiet and so I went to sit with this person. I was tired, didn’t really want to be there and hated working nights but my head was filled with the carols I had been hearing, “where charity stands watching, and faith holds wide the door..” and this person sighed deeply and was gone, “the dark night breaks, the morning wakes and Christmas comes once more...” That little, stark side room in a hospital, which was once a workhouse and is filled with the energy of so much death and darkness, suddenly seemed joyful. I saw the body – the shell of the soul of that person whose hand I had been holding, while feeling so dark and tired and sleepy and sad, and suddenly I wanted to dance. It seemed like all the sad stuff we hang around death is so meaningless because it’s no different from shells on beaches or fallen leaves in autumn.

There was always, in my experience, great respect shown to dead bodies by nurses and porters. In laying out a body, all the nurses I knew spoke to it, treated it with respect as though there person still inhabited it. (Newspapers make out nowadays that nurses are careless of the elderly but that was never my experience as a nurse). So, we did what needed to be done with this person’s body and my colleague was speaking to it as though the person was still there. To me it was nothing but a shell, but, after years of believing in a vague heaven, in that moment and ever since, I would stake my life on the certainty of eternal life and the very real reality of heaven being closer than we know. 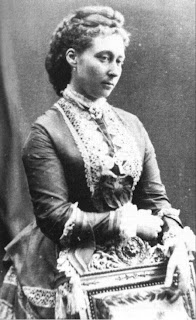 On the terrible 14th – ‘dear, angel Albert’ (oh, sigh, what a beautiful man!) and ‘dearest Alice’ – how significant that Alice shares her anniversary with her beloved father, and I have no doubt whatsoever that he came to lead her on when her final words were, “Dear Papa...”
Gosh! What light she must have experienced! 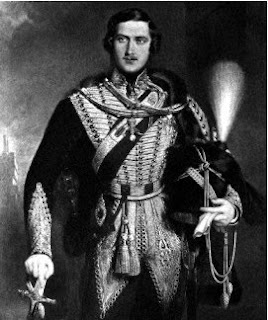 "Lives of great men all remind us,
We can make our lives sublime,
And, departing, leave behind us,
Footprints in the sands of time."

Prince Albert, I think, more than any other person of the time, changed for the better the face of the British monarchy and the face of Britain itself...

It also happens to be the feast day of John of the Cross and I came across one of his very beautiful poem, which seems so appropriate for Prince Albert and Princess Alice today, and posted it here: http://hilliardandcroft.blogspot.com/(Since the snow looks set to return tomorrow, I’d be interested to hear any advice on whether we can feed squirrels or what we should leave out for them. So much has been written about the best things to do for hedgehogs but little about squirrels. Are they best left to themselves?)
Posted by Christina at 23:27

Thank you for sharing these very touching experiences and reflections.

Thank you for taking the time to comment, Matterhorn.

For some reason (and I hope this isn't too morbid) this post reminds me of a sad but touching story of Albert of Belgium and his Queen Elisabeth. When the King's body was brought back to Laeken in the middle of the night, from the tragic cliffs of Marche-les-Dames, his entourage feared it would be too much for Elisabeth to see him before his body had been washed, his wounds covered and so forth; and so, for a while, nobody dared break the news of her husband's death to the Queen. When they finally had to tell her, towards dawn, she was initially shocked and stunned into silence. Then, her first thought was to see the King. When she realized that everything that needed to be done had been done already, and by other hands than her own, she was furious: after all the unknown wounded, dying and dead men she had tended during the war, could they not have allowed her to perform the last services for her own husband? It was a long time before she could forgive or forget. It is a sad story, but it shows how much love and reverence she had for her husband.

Thank you for telling this very moving story which, I had not heard not heard before and which, as you write, shows the love of the Queen for her husband. Doesn't it also show how often well-meaning efforts and kindnesses, which are not always thought through, can backfire. I am sure tghe attendants meant well but, had they not been in shock themselves, might have realised that the Queen would wish to be the first to be told, and to do what she could for her late husband. A very sad story indeed.