The Power of Persuasion and Propaganda 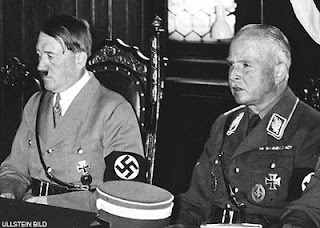 Charles Edward, Duke of Albany and Duke of Coburg, was the son of my favourite of Queen Victoria’s sons – Prince Leopold. It’s very sad that most of what is remembered of Charles Edward is depicted in these photographs of him wearing the swastika and sitting beside Hitler.

Even today, 65 years after the end of WW2 there are frequent condemnatory references on websites and in books to the affiliation between various royalties and the Nazis but it is staggering that while we, even to this day, are subjects of so much propaganda, we judge with self-righteous hindsight the people of the past.

Hitler was obviously a deranged megalomaniac and tyrant but, had I been part of a noble German dynasty who wanted the best for my people, and had seen them suffer the humiliation of the Treaty of Versailles, I might, in the 1930s – without access to all the information we have so easily today - have been swayed by the message of someone who said he could restore our country to its sense of dignity. I might have seen it as an opportunity to restore dignity, too, to the people I believed I was here to serve and govern, and live up to all that had been instilled in me about my duty as a member of the family of rulers to do the best for those in my duchy. I might even have heard Hitler’s voice as the one glimmer of light in the darkness of our country’s history. Perhaps I would have recalled brothers or friends who had died ignobly on the Somme or the Marne, and wondered why it was okay for Britain to raise Cenotaphs to her glorious dead, when my friends and family were seen as aggressors. After all, those real people who died had no more idea about why they went to war than my English or Russian cousins did, but the cousins were heroes and we were demons....though they all set off with the same idea of this being the right thing to do. Since then, I had seen my country brought to its knees, humiliated, emasculated and basically leaderless. Then, in the midst of weakness and despair, came a voice that gave hope....the voice of someone promising to restore all I loved...the voice of Adolf Hitler.

Remember, I had been raised as a grandchild of a prince who believed with all his heart that princes were there to serve and do the best for their people. WW1 left me with a sense of having failed in that....and a sense of my own confusion and sorrow at having witnessed so much slaughter for nothing, and having been cut off from my cousins and siblings.

In such circumstances of desperation and hope of a better future, I doubt I would have been aware that such a man, who gave me hope, was so deranged as to be planning genocide or anything of the sort. I doubt I would have even thought about anything other than the possibility of returning to the ideals of my youth when Germany was a prosperous and respected nation. Perhaps when the reality of what was happening – the madness, the mass slaughter of Jewish people, Polish people, gypsies, homosexuals, people with learning difficulties, all kinds of innocent people – dawned on me, it was too devastating to even think about.

Charles Edward, Duke of Coburg, son of beautiful Prince Leopold, sat alone, watching on television as his sister and cousins attended the coronation of our present Queen in 1953 because he was not allowed into this country, being seen as a ‘traitor’. I just wonder what any of us would have done in such circumstances.
Posted by Christina at 23:53

I don't know the details of Charles Edward's career, but I agree, we tend to be too hard on people in the past, hindsight is 20/20 as they say.

Thank you for commenting, Matterhorn. Charles Edward's life is very sad - his father died before he was born. He was happily attending school in England and suddenly - as a young boy - found himself Duke of Coburg. He didn't want to go to Germany but did what his mother thought best, and was treated with disdain by the military cadets at Potsdam. The war brought a complete separation from his English family but he did what he thought was his duty and when the war was over found himself stripped of all his English titles, refused entry to his homeland....and the rest, as they say, speaks for itself. So he sits uncomfortably next to Hitler, looking like a very broken man...

come on you are discarbing the guy like he was without a mind or will power from his own and he wasnt even born in germany!
p.s
im injoy to reaf your blog!

Thank you for commenting, Yeal.

Maybe I am not allowing him room to think for himself, but I think that, at that time, what Hitler, in his utter madness, was doing wasn't really apparent to lots of people who were fed by propaganda and their sense of being defeated unjustly in WW1.

None of that excuses in the least what came next but is rather an eye-opener, to me, as to why people go out to war or genocide or anything equally horrific, thinking they are doing so for good reasons. Charles Edward, I think, was in an impossible position and I can't imagine that he would have willingly, for one moment, even considered supporting the Nazi madness, had he known what it entailed...

Thank you, again, for taking the time to comment :-)