Princess Marie Louise and the Kaiser

Throughout Marie Louise’s lovely book, there are many references to Kaiser Wilhelm and they present him as a sympathetic, cheerful and warm man for whom Marie Louise obviously had great affection. While Marie Louise was living in Anhalt, she often took tea with the Empress Dona – who comes over as a little bit stiff (e.g. being thoroughly shocked that Marie Louise was – horror of horrors! – once seen riding a bicycle, and another time travelling in an ordinary fiacre rather than a royal carriage!). They obviously had a friendly and close relationship though. Here are a few excerpts from: “My Memories of Six Reigns”: 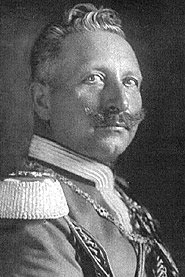 “I want to give all...a true and quite different side to the character of that much-maligned man, William II, German Emperor. At heart he was pro-British, though not, I agree in his policy for there his country and its interests had, of necessity always to be first. He was devoted to his grandmother, Queen Victoria, and admired everything English....I can say in perfect truth that the Emperor did not want war. He was against the invasion of Belgium for two reasons – first, he did not wish Germany to break her word, she having guaranteed to neutrality of Belgium, and second that he knew it would bring this country [Britain] into the war. I can also say that when the Emperor saw the telegram sent to Serbia by Berchtold, he was terribly upset....”
“To return to the affection he had for my parents, the following fact will give you a very touching proof of what I am endeavouring to tell you. In 1916 my parents celebrated their golden wedding. I spite of the war, it was a very happy day...in the afternoon, while we were talking, the steward handed a telegram to my mother. It was from the Crown Princess of Sweden, Margaret, daughter of the Duke of Connaught. The telegram was as follows: “William asks me to transmit to you his loyal and devoted good wishes to dear Uncle Christian and Aunt Helena on the occasion of their golden wedding.” “
Marie Louise’s brother, Albert, served in the Prussian army. She writes: 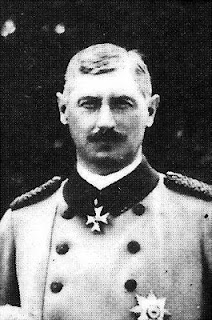 “Although he was on the retired list when war broke out, he was honour bound to place his services at the disposal of the Emperor. But he made on stipulation: that he would under no circumstances serve on the Western Front. The Emperor fully understood his objections and in consequence appointed him to the staff of General von Loewenfeld, who was in charge of the Berlin defences. The General’s mother was an English woman and the Emperor, knowing this, told my brother that he had arranged this appointment on purpose, realising that the General was in an equally difficult position.”
Posted by Christina at 11:18

Thank you very much, Christina!

You are very welcome. Thank you for commenting and for visiting the blog.