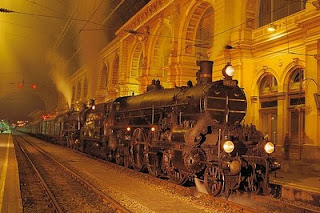 To anyone who wishes to really enter into the spirit of the age of Imperial (and post-World War I) Austria, I cannot recommend highly enough Stefan Zweig’s “The World of Yesterday” – a book that is not only beautifully written, but one which literally transports you on a journey to another time like no other.

Towards the end of the First World War, Stefan was away in Switzerland but, following the Armistice, he returned to a broken Austria. This incredibly moving account is one of the few first-hand witness statements of the tragic departure of the Emperor Karl and Empress Zita, which coincided with Stefan’s train journey back to his native land. He arrives at the Austrian border station:

“Upon alighting [from the train] I became aware of a restlessness among the customs officers and police. They paid small attention to us and made their inspection in a most negligent manner; plainly something important was about to happen. At last came the sound of a bell that announced the approach of a train from the Austrian side. The police lined up; the officials piled out of their offices, their womenfolk, evidently in the know,crowded together on the platform. I was particularly struck by an old lady in black with her two daughters, from her carriage and clothes evidently an aristocrat. She was visibly excited and constantly pressed her handkerchief to her eyes.
Slowly, almost majestically it seemed, the train rolled near, a particular sort of train, not the shabby, weather-beaten kind, but with spacious black cars, a train de luxe. The locomotive stopped. There was a perceptible stir among the lines of those waiting but I was still in the dark. Then I recognised behind the plate glass window of the car, Emperor Karl, the last Emperor of Austria, standing with his black-clad wife, Empress Zita. I was sartled; the last Emperor of Austria, heir of the Habsburg dynasty which had ruled for seven hundred years, was forsaking his realm! He had refused to abdicate formally, yet the Republic granted every honour on the departure which it compelled rather than submitted. The tall, serious man at the window was having a last look at the hills and the homes, at the people of his land. The historic moment was doubly shocking to me, who had grown up in the tradition of the Empire, whose first song at school had been the ‘Kaiserlied’ and who had taken the military oath to obey ‘on land, at sea and in the air’ this serious and thoughtful-looking man in mufti. Innumerable times I had see the old Emperor in the long since legendary splendour of elaborate celebrations; I had seen him in the great staircase of the Schonbrunn, surrounded by his family and brilliantly uniformed generals, receiving the homage of the eighty-thousand Viennese schoolchildren, massed on the broad green plain, singing...I had seen him at the Court ball...and again at Ischl, riding to hunt in a green Tyrolean hat; I had seen him marching devoutly, with bowed head, in the Corpus Christi procession to the Cathedral of St. Stephen, and then the catafalque on that foggy, wet winter’s day in the middle of the war.... 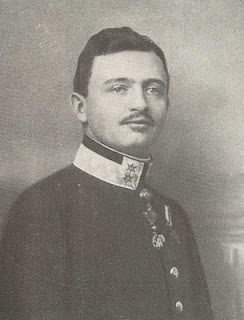 And now I saw his heir, the last emperor, banished from the country...All of those who stood about sensed history, world history, in this tragic sight. The gendarmes, the police, the soldiery were embarrassed and looked abashed because uncertain whether traditional recognition was still in order, the women hardly dared to look up, all were silent and thus the faint sobbing of the old lady, who had come from heaven knows what distance only to see ‘her’ emperor once more, was plainly audible. At last the conductor gave the signal. Everyone stared up mechanically, the irrevocable moment had come. The locomotive started with a violent jerk as if it too had to overcome a disinclination, and slowly the train withdrew. The officials followed it with a respectful gaze, after which, with that air of embarrassment which is observable at funerals, they returned to their respective stations. It was the moment in which the almost millenary monarchy really ended. I knew it was a different Austria, a different world, to which I was returning.”
Posted by Christina at 23:35

That is a very moving account, indeed. I love these kinds of personal recollections, cutting to the heart, as it were, of great people and events.

Thank you for this account, Christina. It was really impressive. He was indeed returning to a different Austria.

Thank you so much for your comments. Oh yes, the world changed so dramatically following the First World War! Was there ever such a huge shift in the whole of history? Stefan’s descriptions of Austria in the immediate aftermath are quite harrowing – the Treaty of Versailles was such a dreadfully vengeful and self-righteous thing, wasn’t it? I truly believe that, far from being an Imperial War – as it is so often described – World War I was instigated, carried out and concluded by a quite different political agenda based on envy and the desire for power and financial gain (bankers, ministers etc.) The Kings were barely involved at all and the people were duped to the extent that they stood submissively by, feeling powerless, while those systems and monarchies, which many of them loved, were destroyed and the kings were exiled or murdered against ‘the will of the people’...

I wouldn't be so protective of the monarchs' actions during WWI, except for Emperor Karl, who acted in an exemplary way. I am sure Wilhelm II and Nicholas II and all the other monarchs loved their nations and their peoples, but some of them acted -consciously- wrongly and caused their peoples great pain because of their ambitions. It's a pity the Austrian monarchy was not restored. Archduke Otto would have made a great emperor, though I'm not sure about his son (I believe in second chances, though). There are several archdukes who are worthy successors of Karl.

Of all the casualties of World War I, the end of the Hapsburg Dynasty is the least known about. Historians view WWI as the true start of the 20th century, the beginning of a bloody, demoralizing and anxiety prone age.

It's sad to see the world change before your eyes. Sometimes a static world is the only thing that gives one peace.

Of all the monarchs Karl was surely the most unfortunate in that he had had no influence at the time the war began - Franz Josef actively kept him from knowing the details so that he would remain blameless - and yet found himself Emperor at a time when the war was going so badly. He also was one of the few monarchs who had real first hand experience on the battlefield. But I think, Anonymous, that the others were not all so ambitious. I firmly believe that Tsar Nicholas tried his utmost to avoid war, and even the Kaiser was all bluff and blusters and was shocked when war actually happened. I believe the ultimate responsibility for the war lies squarely on the shoulders of Austria's ministers who duped the Germans, and assumed Russia would ignore their aggressive actions as she had done in 1908 when they annexed Bosnia and the Russian Foreign Minister was basically tricked into accepting it. I do believe the royalties were large innocent of what happened....
And I greatly appreciae your comments - thank you!