The Wedding of Karl and Zita 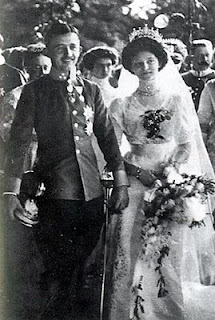 Isn’t it exhilarating when people of the past, whose names have been so frequently repeated in history lessons in a rather one-dimensional fashion, start to become really real to you? There is such a wonderful moment when a person who was nothing but a name on a page, remembered for one small incident of their life or death, seems to become flesh and blood again before your eyes. It is rather like bringing a cloudy picture into focus through a camera lens – once there was only a vague outline but little by little the vibrancy of colour and form take shape and there is a moment of absolute clarity.

The Austrian Archduke Franz Ferdinand is remembered primarily (and, for the most part, solely) as the man whose murder was the catalyst to the First World War. If you Google Franz Ferdinand, the main sites that appear recount only his death (or, more frequently, the more recent music band ‘Franz Ferdinand’!). Where sites or books go a little further than the event of his death, he is described simply as unpopular, aloof, angry and not really a very attractive character.

Some time ago, I became fascinated by this man for whom, for some obscure reason, I feel great warmth. Like so many historical royalties, he is written off so glibly in one or two sentences but, the more I learn of him, the greater warmth I feel towards him. No one is ever quite so one-dimensional as history seems to present him/her.

As this is set to be a year of joyful royal weddings in Britain, here is a wonderful clip of original film footage of another joyful royal wedding, a hundred years ago: that of the lovely Archduke (future Emperor) Karl of Austria, and Zita of Bourbon-Parma. Franz Ferdinand appears several times in the clip and far from being the aloof character of popular description, he appears like any other happy participant in any other happy wedding at any time in history.

Incidentally, while attending one of many funerals last year (thank goodness it is now 2011 and 2010 is over!), it was striking to me to see the same mourners, the same setting, the same movement as is seen at every other funeral throughout the ages, whether it be on old film footage or in paintings. Weddings, births, Christenings and funerals - the continuity of life, the continuity of the cycle of life – there is something quite lovely in the way that, no matter how advanced and sophisticated we think we are, we still move with the same seasonal cycles, as individual families and as humanity as a whole.

Apart from the cars and the clothing, the lovely clip of Karl’s wedding, could be from any era. If you look at the faces of the people in the background, it is just a happy family occasion. There is something so beautiful about it and about the way that old film footage gives us an insight into the characters of people which often contrasts sharply with the story that is presented by historians.

I am so grateful to the person called ‘storicus’ who has uploaded so many beautiful videos to YouTube.
Posted by Christina at 23:06

"[O]ld film footage gives us an insight into the characters of people which often contrasts sharply with the story that is presented by historians."

I agree. I was recently thinking about how 'truth is the daughter of time' and yet truth often seems to be lost in time. Despite all their painstaking research to probe into the past, some historians seem to lose the immediate, vivid sense of people's personalities, which may be much more evident in contemporary, first-hand accounts, photographs, film clips, and so forth. Sometimes, an unnecessary cynicism seems to creep into the work of later writers, especially...

Thank you for your comment, Matterhorn. I so agree with your last sentence! And I agree that while "truth is the daughter of time", so often that truth becomes manipulated when we set out only to decry rather than to appreciate.