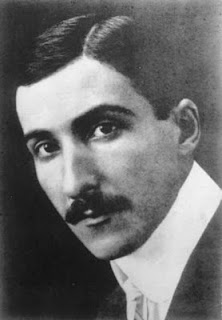 “The World of Yesterday” by Stefan Zweig presents one of the most remarkable and honest depictions of the world in 1914 that I have ever read. Zweig, an Austrian and Jewish poet and author, captures so brilliantly the ambience of that era – from his thrilling descriptions of the carefree world of innocence and his meetings with literary figures of the time, through the madness of xenophobic hatred that raged at the outbreak of war. His writing is so immediate because he lived through it, and, unlike many of his peers, he had travelled a great deal and made friends all over the continent and so stood aghast at the way in which poets and authors turned their art into propaganda for the war machine. Writing as an Austrian, he speaks a great deal (with horror!) of the German poets of the era and the way in which their anti-English works served to inspire hatred and prolong the war.

It was rather interesting to me this evening, having just read Zweig’s wonderful

descriptions, to be discussing some favourite poems when someone mentioned one which he had learned in school: “Vitai Lampada” by Sir Henry Newbolt. I used to love this poem because it seemed so inspiring when feeling out of sorts, but reading it again tonight, and looking into the background of it, it is clear that like Zweig’s friends, Newbolt was writing to prolong the myth that somehow war was glorious.

There's a breathless hush in the Close to-night --
Ten to make and the match to win --
A bumping pitch and a blinding light,
An hour to play and the last man in.
And it's not for the sake of a ribboned coat,
Or the selfish hope of a season's fame,
But his Captain's hand on his shoulder smote --
'Play up! play up! and play the game!'

The sand of the desert is sodden red, --
Red with the wreck of a square that broke; --
The Gatling's jammed and the Colonel dead,
And the regiment blind with dust and smoke.
The river of death has brimmed his banks,
And England's far, and Honour a name,
But the voice of a schoolboy rallies the ranks:
'Play up! play up! and play the game!'

This is the word that year by year,
While in her place the School is set,
Every one of her sons must hear,
And none that hears it dare forget.
This they all with a joyful mind
Bear through life like a torch in flame,
And falling fling to the host behind --
'Play up! play up! and play the game!'

The poem no longer seems so beautiful as it once did.
Posted by Christina at 23:16