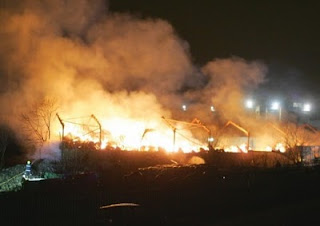 On Sunday evening a fire broke out in one of the barns of the farm, which is home to many rare breed animals, at Temple Newsam House. I did not hear about it until yesterday, when someone told me that the beautiful cattle, who are housed there and whom I see very often, had been in danger and had probably died in the flames. I was shocked beyond reason at such a thought but happily, it turned out that the animals were all – thanks to the heroic action of the fire brigade – rescued and quite safe. The thought of those pensive, beautiful creatures being caught in something so frightening was so horrific and what was more horrific was the suggestion (though the cause of the fire has not yet been confirmed and this was pure speculation) that the fire was an arson attack.

I spoke of this to someone whose immediate response was, “When they catch the culprits, they ought to lock them in a barn and light a fire outside until they experience the terror those poor animals must have felt!” And it struck me as rather odd that the same person then sat down to a beef dinner!

Apart from my personal views about the unnecessary and cruel slaughter of animals, it raises rather an interesting question. If a person abuses an animal, by law s/he can face a prison sentence. If, however, that person has a license to slaughter animals in abattoirs (where sentient creatures still feel terror) no one objects. The same is true of humanity. If someone takes it upon him/herself to terrorise or murder someone else, people rise up in indignant horror at such a crime. Crowds bang on the police vans taking the murderer to trial and people seem to gain a sense of their own self-righteousness in condemning the crime. If, however, killing is legalised and made respectable (in the case of a war, for example, or – in some countries – an execution) the victims surely feel the same terror, the same pain, the same loss, but it’s alright because the government said it was alright to commit this killing.

If someone had set out to deliberately harm those animals in the barn, I must confess, my initial thought, too, was that I would like that person to feel the fear that those creatures must have felt, but that was simply a reaction – and reactions, as opposed to responses, are always dangerous. Propaganda thrives on creating a reaction and too often legislation numbs human conscience and makes something ‘right’ simply because it has government authority behind it. If people had been able to think for themselves, instead of relying on legislation (someone else’s idea of what is alright and what is not alright) would so many millions have died for nothing on the Marne and the Somme? If people had thought for themselves, instead of relying on legislation, would there have been so many guards and commanders willing to carry out the atrocities of the concentration camps?

Well, I walked through the woods at Temple Newsam today and, seeing the shell of the burned barn still smouldering, and the firemen still pumping water from the lake (what a feat of engineering!), and three donkeys happily grazing in the field nearby, I have to say three cheers for the wonderful fire brigade and thank goodness those animals were saved.
Posted by Christina at 22:51

Thank you, Matterhorn. I agree :-)